Track 4: Seizing an Alternative: The Future of Meat without Animals

Track 4: Seizing an Alternative: The Future of Meat without Animals

This track explores “The Future of Meat Without Animals,” following recent financial and cultural endorsements of meatless meat companies by major public figures. Participants will address ethical, economic, agricultural, religious, cultural, and gender issues surrounding a future of meatless meat during the event as well as in pre-conference online forums. 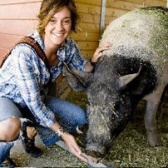 Brianne Donaldson is a professor and farmed animal advocate, exploring the intersection of Indian and western metaphysics, ecological ethics, and religion and science. She advocates new paradigms in agriculture and trade that free animals, people, and ecosystems from violent industrial models. Donaldson is editor of Beyond the Bifurcation of Nature: A Common World for Animals and the Environment, and author of the forthcoming Creaturely Cosmologies: Why Metaphysics Matters for Animal and Planetary Liberation, as well as several articles on these themes. She is a researcher for the international non-profit Vegan Outreach, and serves as Assistant Professor of Philosophy and Religious Studies at Monmouth College.