“You can never change things by fighting the existing reality. To change something, build a new model…”
– Buckminster Fuller

Pandotopia Hubs are places radically committed to accelerating the pace of change, focused on the Earth and its people.

Our prototype Hub is at the Maryknoll Sisters’ compound in Monrovia, CA.  We’re inspired by the commitment of the Sisters, who have served the common good in some of the most difficult places on Earth and have put it all on the line.

Hubs are highly entrepreneurial — at the center of each Hub is a Pando Accelerator, where change makers come to kick-start hyper-local environmental and social impact initiatives.

They utilize unique branding to bring diverse partners together, and are managed independently for bold, efficient action and financial sustainability.

The first Pandotopia Hub is being prototyped in collaboration with the Maryknoll Sisters in Monrovia, CA at the 7 1/2 acre site of their convent and retirement and health center.

The location is being reimagined to meet the aims of 21st century mission, targeting social and environmental needs for the municipalities of Los Angeles County, and working in close collaboration with NGO, faith, business, education, and government institutions. 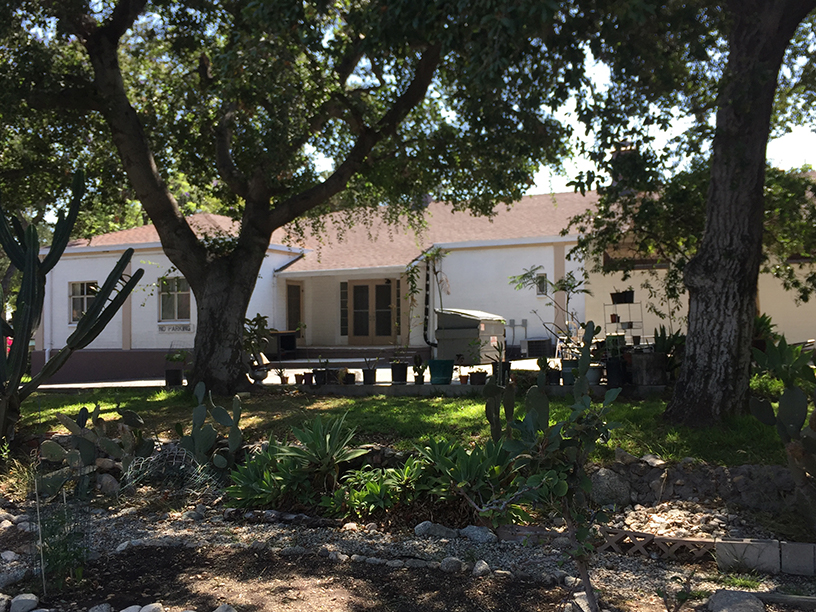 Annex at the Maryknoll Sisters’ compound in Monrovia, CA, and home of Pandotopia at Maryknoll.  Site of a former TB treatment facility for Japanese-American patients who could not be treated elsewhere, the location is being reimagined as an accelerator of social and environmental impact for the municipalities of Los Angeles County.

The galvanizing idea is to create on the Monrovia compound a living incarnation of the principles of Pope Francis’s encyclical to the world, Laudato Si’. Released in the summer of 2015, the encyclical calls for communities of “integral ecology” where people live in harmony with the Earth and each other. It is a vision that is nearly identical to the one that Pando chair John Cobb calls “ecological civilization.” To get there, Pando creative director John Bielenberg says we have to start thinking wrong.

To our knowledge, Maryknoll Monrovia is the first location to explicitly set out to incarnate this vision. In this effort, we aim to draw upon the talent pool of Los Angeles County CSOs, other social justice and environmental change-makers, and the rich experiences and skillsets of Sisters themselves to create what we think of as a “residential research park for integral ecology.” We envision the compound becoming a place for modeling, experimentation, and learning focused on the Pope’s encyclical.

The physical construct could include an actual multi-generational living community, and in addition include live exhibits addressing agricultural, energy, water and waste generation and treatment along with cutting-edge LEED buildings housing staff, lodging and training elements.

The financial model could include trainings (and possibly subject-matter certifications), residencies, and grants from corporations, foundations and government entities interested in seeding this vision of self-sufficiently leading to positive environmental and social impacts. Faculty and in-residence fellowships could be established to maintain a vibrant living and learning environment.

We aim to utilize this eco-system facility as a living repository (physical and digital), housing the learnings and output of the works emanating from the Pope’s encyclical, the L.A. County sustainability plan, city-specific efforts, and corporate and non-profit programs.

We believe a hopeful vision of the future is possible, and that the Maryknoll compound in Monrovia can model it for Los Angeles County.

Congregations of women religious offer an extraordinarily rich and counter-cultural heritage serving the common good. At this time, in a world filled with noise, pollution, and in-justice at every level, women religious are being called, louder than ever, to be a prophetic voice in reimaging how the world can take a different path than the one it is on now. They can do this because of their understanding of the inter-connectedness of all elements in the universe and the richness of their charisms. The founders of and collaborators with Pando Populus also share a vision for an alternative outcome for the future, one that is distinctly aligned in its concept with the vision for an integrated, unified, and inclusive “civilization” – a vision shared by many communities of women religious.

Pando Populus was conceived and organized around the idea that there is an alternative to modern industrial life, and that in order to avoid catastrophic conditions we must seize an alternative way of thinking and living. That “alternative” is an ecological worldview.

“At this point, we either re-think everything or give up hope. So we’re re-thinking.”
– John B. Cobb, Jr.

For many years, pockets of activity have organized to reduce climate change, save endangered species, curb poverty, cap the influence of financial markets, bring about democratic accountability, reduce militarism, and so on.

What is missing is a new paradigm that integrates these various concerns and activities and sets them in the context of a broader vision.

Such was the work of philosophers up until the 20th century. But today, many have given up the task of thinking holistically about the world, or proposing anything like new foundations for a civilization that take us in a different direction; and few attempt to integrate thought with action.

PANDOTOPIA Blitz is an ongoing series of brainstorming events for representatives from a variety of congregations of women religious and Pando Populus to begin “re-thinking” together, by Thinking Wrong, about a new paradigm – one with integral ecology at its heart – and what this might mean for mission, charism, and legacy at local levels.

Pando at Maryknoll is a founding member of the Pandotopia Network, whose partners include communities of women religious nationwide.