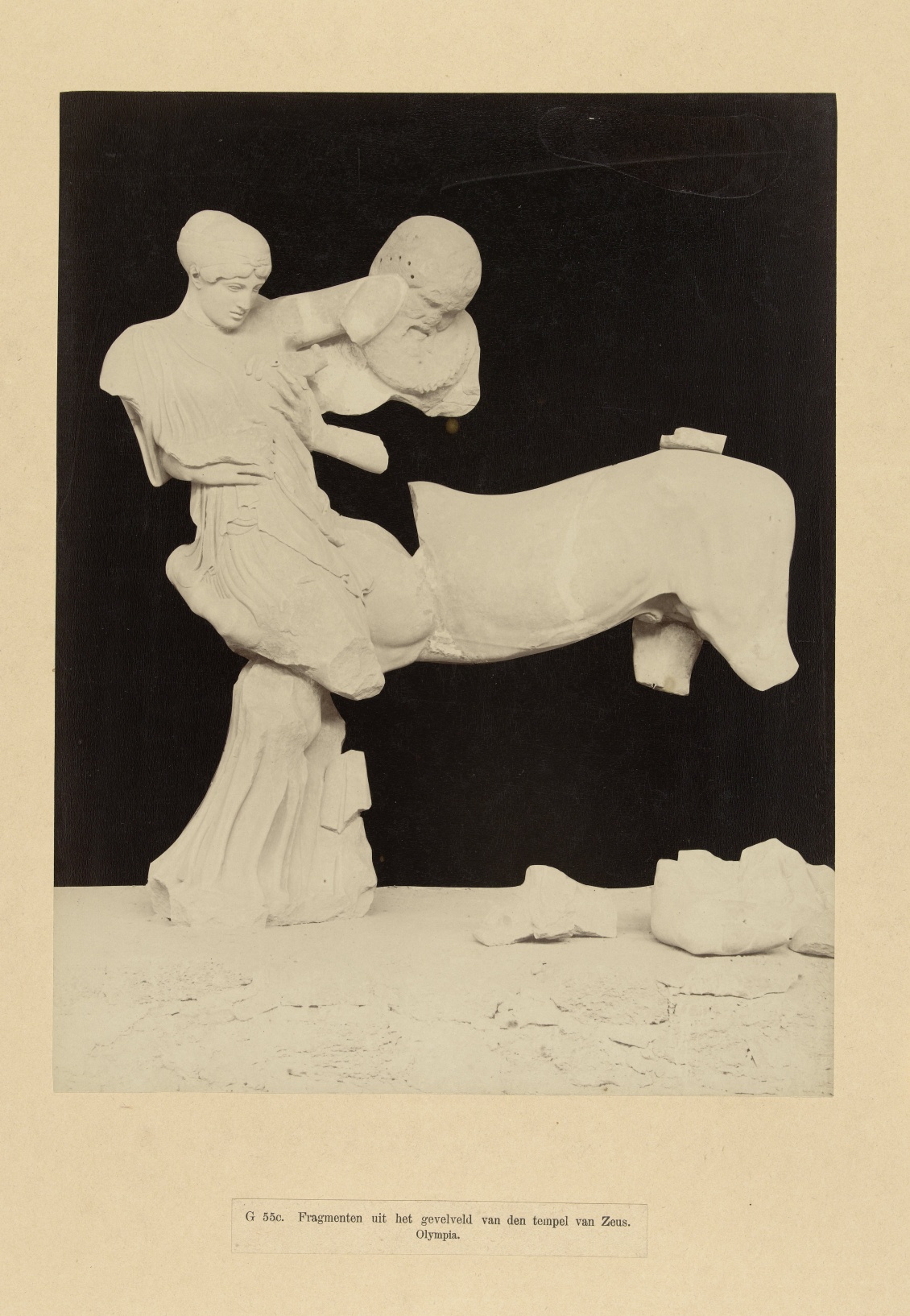 Fragments of the front field of the temple of Zeus at Olympia, anonymous , ca. 1895 – ca. 1915. Courtesy, Rijksmuseum, Amsterdam.

As a student of history I remember that glorious moment of Arabic and Western Renaissance.

In the period of about three hundred years, stretching from mid-eighth to mid-eleventh centuries, Moslem Arabs out of Baghdad and Spain fell in love with Greek culture. The Caliph of Baghdad sent his agents to Greece buying ancient Greek philosophical and scientific manuscripts. Nestorian Christians translated the Greek texts into Arabic.

Arab scholars then studied the works of the Greeks and built their culture. Their commentaries on thinkers like Aristotle, the greatest Greek philosopher and inventor of science, brought out of Aristotle insights that helped Arab scientists advance their own search for the workings of the natural world and the cosmos.

Those Arab commentaries on “The Philosopher,” Aristotle, and other Greek natural philosophers leaked to the West when the West was ready to “discover” the Greeks – in the period from the thirteenth to the fifteenth centuries.

Like our twentieth and twenty-first centuries, the thirteenth to the fifteenth centuries were full of war and terror. The raging Mongols brought unprecedented destruction to Asia and the Middle East. A Greek scientist of the fourteenth century, Nikephoros Gregoras, likened the Mongols to a violent arctic sea drowning the civilization of the Middle East. The Mongols appeared like a force of nature.

But the states of Europe did not pay much attention to the Mongols. They were crusading against each other, the so-called heretics, and Moslems. Venice, France and Germany, for example, dismantled Greece in 1204. Such a vicious blow destroyed Greek independence and opened the country to conquest by the Mongol Turks. The Turks took advantage of the schism among European Christian societies. They kept up the military pressure, and, in 1453, they conquered Greece.

The Greek calamity opened the West to Moslem danger. But, strangely, the Greek fall accelerated Greek influence in the West. This influence developed roots in the thirteenth century when Bologna in Italy founded the first European university basically to study Aristotle. The university of Oxford and Paris followed on the pioneering steps of Bologna. They, too, came into being to study Aristotle.

But in 1453 Greek culture spread all over the West. Pope Nicholas V spent plenty of gold in buying Greek books. Greek scholars also arrived in Venice, Padua, Florence, Rome, Paris and other European cities loaded with Greek manuscripts. Greek scholars started teaching Greek. But, above all, they translated Greek manuscripts into Latin, inspiring a tremendous interest in Greek philosophy and science. For example, the works of Archimedes, especially his mathematical physics, triggered the science of Galileo and Newton to investigate nature and the heavens.

Just like the Arabs in the eighth to the eleventh centuries developed their culture on the basis of Greek thought, the Westerners did the same thing in the fifteenth century. Greek thought enabled Western scientists to make advances in physics, astronomy, cosmology, mathematics and biology. This progress helped the Europeans understand the natural world and the cosmos. We call this outburst of creativity in both the sciences and the humanities “renaissance.” Our world came out of the fifteenth and sixteenth-century Renaissance.

However, this so-called “modern” world quickly abandoned Greek wisdom. Seventeenth-century scientists put Aristotle into a purgatory. They also constructed a machine out of the sacred natural world and cosmos of the Greeks. Even humans started thinking like machines.

This dehumanized civilization reached its apogee of violence when, during World War II, it spawned the nuclear bomb. Immediately science became dangerous.

Second, the destructive power of the nuclear bomb is so vast that it remade the world into a factory of poisons, gigantic private corporations, powerless international organizations, and a few states armed with nuclear bombs. The owners of the bomb left billions of people without democracy or power.

If this new world machine had merely local deleterious effects, it would be bad, but tolerable. However, its effects are cosmic, threatening both people and the Earth.

For the first time in universal history a civilization had become suicidal.

The owners of the bomb made petroleum, natural gas, and coal lords of the planet. They did that for energy. But for the past several decades they learned that the burning of these “fossil” fuels raises the temperature of the planet. Higher planetary temperatures threaten a global holocaust.

So in 2015 we face unprecedented dangers infinitely worse than the Mongol danger of the thirteenth century or the global war of the twentieth century: states armed with nuclear bombs supporting the fossil fuel establishment determined to make us ill and kill us and, possibly, the Earth with poisons and unlivable temperatures.

This emergency is barely obvious or understood. Most people like to believe global warming is somebody else’s problem. I face this apathy daily. I don’t see any change in how people move from one point to another. They drive their global warming cars like there’s nothing wrong. They eat conventional, pesticide-laced food produced on farms fueled by petrochemicals. Even the deadly pesticides are petrochemicals. Indeed, the industrialized agricultural system is responsible for almost 50 percent of all global warming gases.

So how do you resist such a Goliath?

Democracy, a gift of the Greeks, might just be the proper medicine to halt the further intensification of the petrochemical-coal holocaust. Apathy must be replaced by knowledge and participation in our politics. Vote out of office corrupt politicians. Demand a train in the middle of every highway. Replace petroleum cars with electric cars and public transportation. Eat organic food.

Demand our agricultural universities serve our family farmers. This should preclude any connections with the petrochemical establishment. Our land grant universities could become the centers for rethinking and remaking rural America. The desired vision would be one of millions of small family farms, good food, and democracy.

A democratic revolution might just save us from the folly of a machine civilization fired by nuclear bombs, petrochemicals and coal. A solar ecological civilization is the answer.

Evaggelos Vallianatos is the author of hundreds of articles and several books, including Poison Spring: The Secret History of Pollution and the EPA (with McKay Jenkins, Bloomsbury Press, 2015).