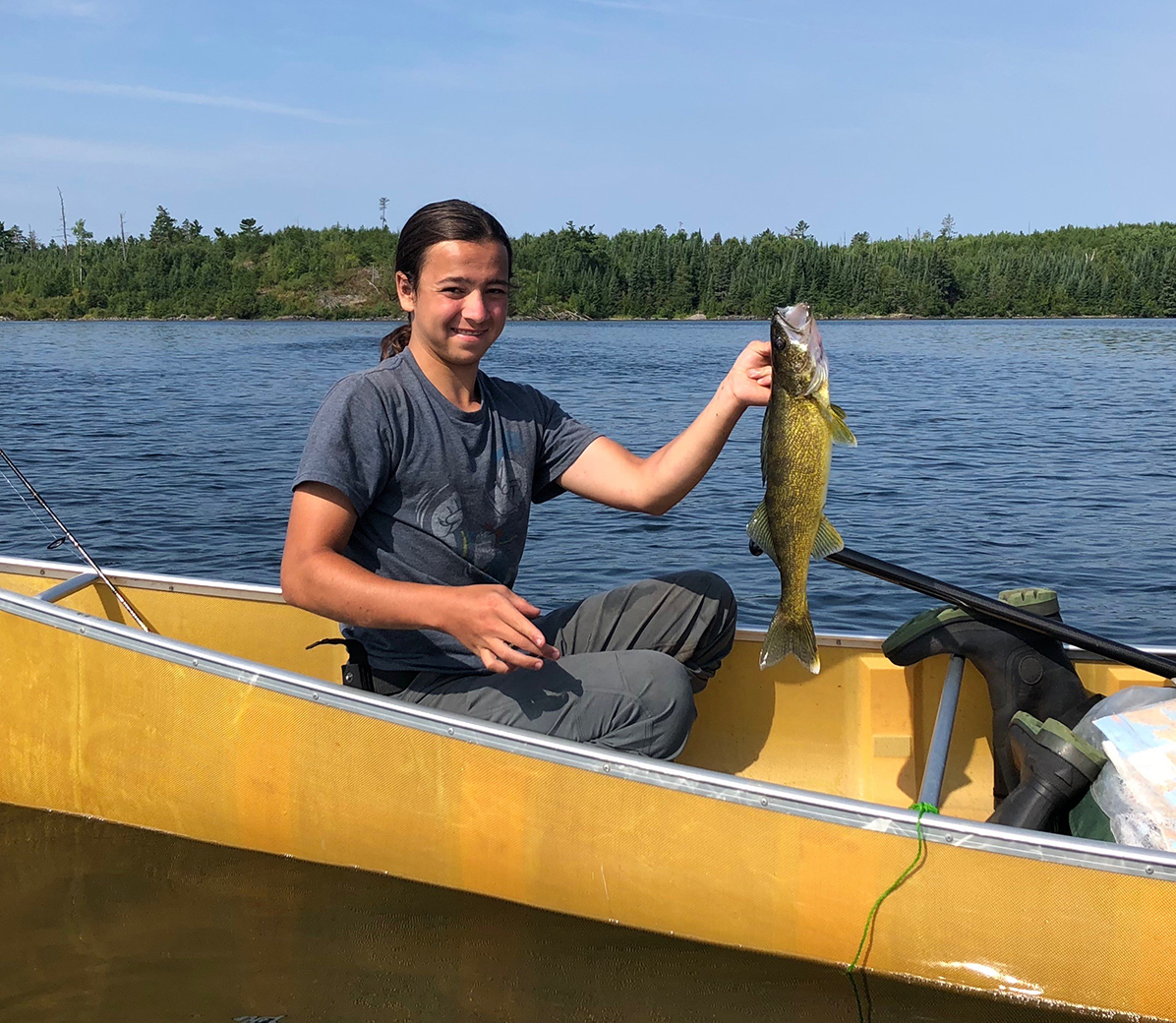 This is the second in a series of occasional blog posts by Joseph Goldstein on this Pandomaniac’s fight to save the Boundary Waters from mining. Read his previous post here.

Recently, I was fortunate to join hundreds of outdoor enthusiasts at the Conservation Alliance Breakfast in Denver, CO. The Keynote speaker was Mr. Timothy Egan, the inspiring author of one of my favorite books, The Worst Hard Time. He spoke about just one of the many things that has made America great over the last hundred years: our rich legacy of shared public lands and wilderness. It is a distinctively American concept, and has a storied history that is both tumultuous and eerily familiar in our current political climate.

As Mr. Egan spoke, I began reflecting on my own “conversion” story – that moment in time when wilderness reached into my soul and changed me irreversibly. It isn’t difficult for me to pinpoint – the year was 2007, I was six, and we had just paddled into the Boundary Waters Canoe Area (BWCA) for the first time. I spent the next week shoeless and shirtless, running through the woods, climbing trees, swimming, and drinking from the clearest of lake waters, building fires, catching, and learning to clean fish; and, of course, being utterly transformed as I watched the stars and listened to the stillness of the night. That week remains among the most vivid of my life’s memories.

“Life only gives you one chance to get it done”

As a result, I learned about caring and fighting for the things that matter at a very young age. As described in my previous blog post, in October of 2014 at age 13 I was diagnosed with High Risk Acute Lymphoblastic Leukemia. This past February I took my last dose of 3.5 years of daily chemotherapy. It was remarkably anti-climatic, and as I swallowed the pills and headed up for my homework I recognized I had closed the door on cancer, and it was time to up my game on behalf of the BWCA. And so on June 19th, in front of the Washington Monument and with a small group of equally committed teenagers by my side, together we launched a new initiative: Kids For The Boundary Waters (Kids4BW).

Kids4BW is focused on honing a message of conservation and protection of the BWCA, and teaching kids how to advocate – how to write letters, make phone calls, follow up with decision makers, and how to make personal appeals during fly-ins to meet with elected and appointed officials. The fight for the BWCA is most especially about us KIDS. We will be inheriting whatever mess gets left behind, and the more engaged we become as teenagers, the more we understand our power and our ability to effect change, the more likely we are to STAY engaged.

This is our future – our water, our public lands, our resources, our health, our country – at stake.

Living with cancer is no joke – it’s hard in ways that are difficult to articulate, and it takes things you have to fight very, very hard to reclaim. But cancer is also a surprisingly good teacher. Most importantly it trains you to fight like hell for the things that matter. Although I’ll still be sorting through the lessons for years to come, the one thing I have learned for sure is that sometimes life only gives you one chance to get it done. And I think this is it. This is my chance to help save America’s most visited and pristine water wilderness, the Boundary Waters Canoe Area Wilderness.

“My generation will become an unstoppable voice for environmental protection”

Over the past 3.5 years, whenever my treatment allowed, I travelled to Washington D.C. to meet with lawmakers and leadership to make our case in defense of the BWCA. I wrote blogs, gave speeches, made phone calls, wrote letters, and granted interviews – whatever I could do with my time and energy to try and protect this wilderness I love, that so many Americans love so much. The Boundary Waters are 1.1 million acres of pristine water and unspoiled woods. It has a long history of environmental protections put in place dating back to 1909 when President Theodore Roosevelt established the Superior National Forest. I felt as though I walked in the footsteps of environmental giants with every trip, every meeting, and every small success in the fight.

Though the Kids4 campaign focuses on preservation and protection of the BWCA, I believe that teaching kids about the process of advocacy will spill over into political action in defending (and visiting!) other wild places as well. The BWCA was like a “gateway drug” for me, getting me hooked on camping, on backcountry biking, on dogsledding, on backpacking, and on adventuring to remote wild places around the world. Wilderness adventures instill a hunger for more. And although there are a multitude of reasons why people choose to pick up a paddle, or throw on a pack and head into the wilderness, one thing is certain: universally we all come out changed for the better.

Since our launch in June, we have been hard at work creating the infrastructure and making the connections necessary to recruit new voices and get our message out. But most importantly, Kids4BW recently activated its network to call and write in opposition to the Nolan-Emmer amendment to the 2019 Interior Appropriations Bill. During floor debate, Rep. Betty McCollum (D-MN) read aloud from 7 handwritten letters she had received from Kids4BW advocates, and at the last minute the amendment was withdrawn when Rep. Emmer realized he did not have enough votes for it to pass. We count this as our first official (shared!) victory on behalf of the Boundary Waters! 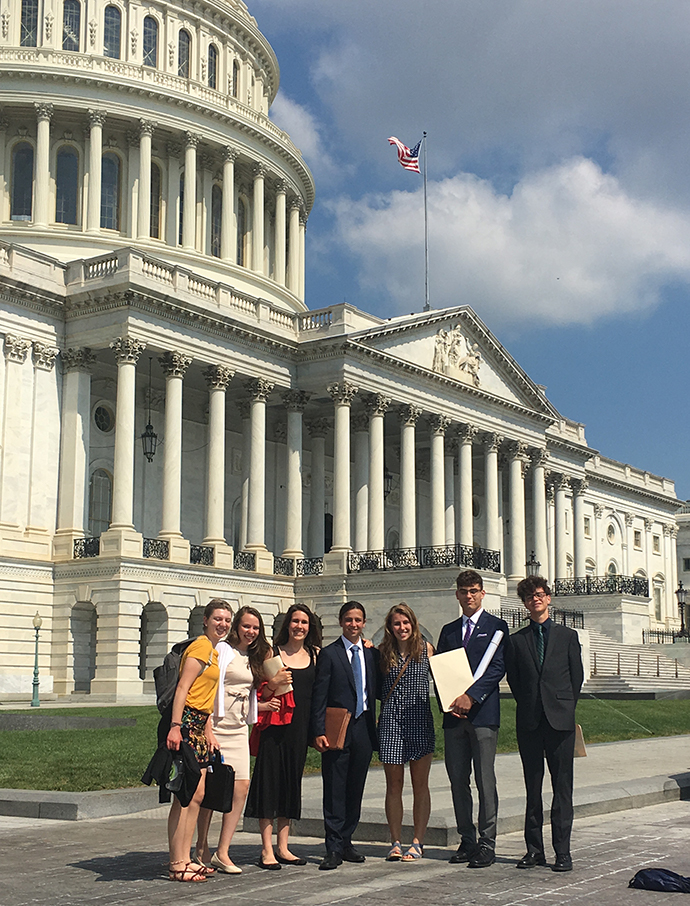 Members of the Kids For the Boundary Waters in front of the U.S. Capitol building (Joseph Goldstein, center), prior to a recent meeting with Senator Dick Durbin (IL). Over a two-day period, the Kids took a dozen meetings with four members of Congress, five U.S. senators, the new U.S. Forest Service Chief, and leadership at the departments of Interior and Agriculture.

I know I speak for every member of our Board when I say we take this fight very, very seriously and are committed to doing everything possible to defend the BWCA. Beyond that, we are wholly dedicated to training the next generation of advocates in how to effectively use their voices and their considerable power. I truly believe my generation will become an unstoppable voice for environmental protection, defense of our public lands, and protection of wild places across America.

Suit up. Show up. Repeat.

While it’s easy to get trapped into thinking that your efforts don’t matter unless you can “change the world,” I’ve learned that it’s all about the small steps forward. It’s about getting back up despite setbacks, about consistently showing up, and about staying even when you’re discouraged, when the work you’ve done gets undone, or when other things compete for your time. Change happens when you suit up and show up, over and over and over. It may not be enormous instantaneous change, but many small steps over a long period of time eventually add up. And though we are “not obligated to complete the work, neither are we free to abandon it.”

I hope you’ll join me in defending the Boundary Waters Canoe Area Wilderness.

Joseph Goldstein is the Founder and President of Kids For The Boundary Waters. He is a student at Glenwood High School, and lives on a farm in Springfield, Illinois with his parents, three brothers, three dogs, 10 cats, 12 sheep, and a variety of chickens, ducks and other farm critters. He plays the guitar and trombone (marginally), and skis and mountain bikes (awesomely).