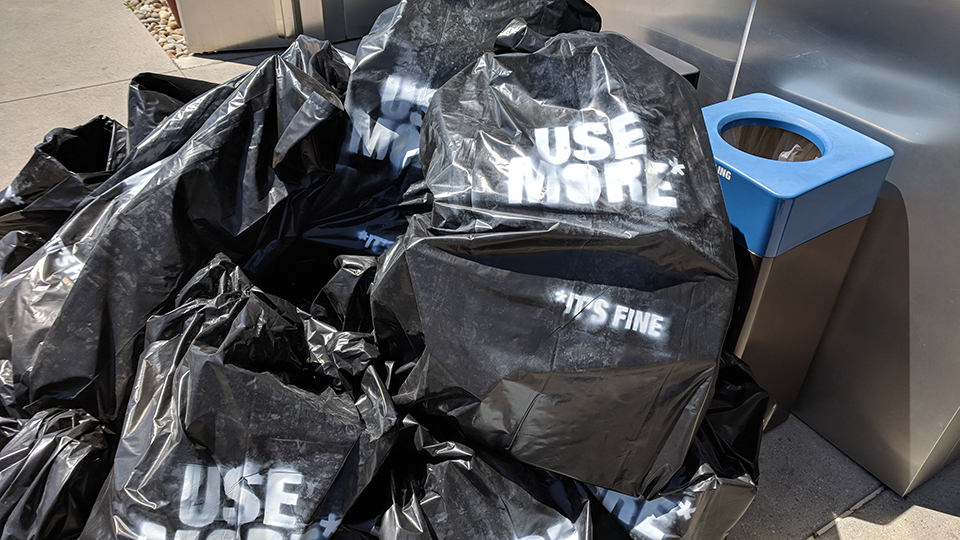 “USE MORE, it’s fine” sends an ironic message at the entrance to the LA Cleantech Incubator for JUNK BATTLE!, April 20.

On April 20th, I spent the day in downtown Los Angeles helping Pando Populus with the inaugural JUNK BATTLE! event. The format was a mix between TED-style talks and a design competition with innovations developed by teams from UCLA, ArtCenter College of Design, California Institute of the Arts, and LA Trade Tech College. Teams were competing to see who can create the coolest stuff from big piles of their own institution’s trash. Pretty awesome.

During the half-day event, the teams presented their research, prototypes, and final designs on stage in front of an audience, as well as the judges:

The judges asked follow-up questions to dig deeper into their teams’ work. At the end of the event, judges picked a winner based on criteria focused on showing a strong understanding of the waste stream from their institutions: the process students used in dealing with and understanding the waste, the end result of their work, and the possibilities for scale.

Throughout the event, speakers came on stage to address various topics around trash, including single-use plastics, LA county’s recycling efforts, a systems-thinking approach for a zero-waste campus, e-waste, and microplastics, just to name a few.

As a co-founder of a creative studio that helps companies tackling climate change launch creative solutions, I was inspired by what I learned from the speakers and the stories they shared with the crowd. As an adjunct faculty member at CCA, I was excited to see the amount of work that was generated and quality of the final designs, as well as the enthusiasm from all the students involved in JUNK BATTLE!.

As part of the Pando Populus core team since the start of the non-profit in 2014, I’ve seen the amount of work the organization has done on the ground in LA county and beyond since that time. (Read about our road trip to Pando in the fall of 2017.)

Pando was founded by taking inspiration from the oldest and largest living organism on the planet with the aim to create a more ecologically balanced culture. Since pando the tree is a quaking aspen grove in the middle of Utah that extends over 100 acres from a single rootball, one of the mantras of Pando Populus is “Everything is connected.”

I believe in this mantra. So much that I can’t help but think and see the world with this in mind.

Many of the speakers touched upon ideas and shared stories that fall under this mantra: the broken system in place that sorts trash, how “away” isn’t really “away,” how the materials in products affect supply chains which then affects ecosystems once those products are discarded, how the environmental impacts of plastics in oceans affects sea life and coastlines, and how consumers’ purchases affect the strain of finite resources from the planet.

As speaker Marcus Eriksen put it, “Change the product, Change the system. Change the narrative.”

What would happen if every design school brought JUNK BATTLE! to the classroom? Onto their campuses? Imagine students, primed for learning and eager to get their hands dirty, getting a first-hand look at their footprint on the world.

Designers produce waste, but what if we were able to change the narrative that we can reverse this, where we can design not just products, but systems that are regenerative.

Climate change is here. There is no stopping it. At this point, the most important thing is for everyone to step up and understand their place in the world, to get a better sense that the things we produce have to go somewhere. And that there are repercussions if that somewhere isn’t considered.

Out of the classroom and into the board rooms

JUNK BATTLE! was created to raise awareness that colleges and universities produce a ton of waste. Perhaps JUNK BATTLE! sets its sights on large companies, local governments, sprawling counties, or other industries such as apparel or electronics.

How might we get the message of JUNK BATTLE! in front of key decision-makers to show them the evidence of how our footprint is affecting other aspects of life in front of them and beyond?

How might we incentivize companies to design products with a cradle-to-cradle approach?

How might we push for city governments to incorporate policy that puts the planet and people before profit?

How might we encourage designers to approach their work through a regenerative mindset?

How might we vote with our dollars so that companies know that consumers want higher-quality, longer lasting products?

And the winner is

The team from LA TradeTech took home the first ever JUNK BATTLE! grand prize award. Their project took a holistic approach to the waste that LATTC generates, creating furniture out of junk cardboard, refurbishing computers that had been thrown away, and creating a system for reusing old concrete for permeable walkways and outdoor structures.

UCLA mounted an exhibit featuring a dozen individual exhibits, including posters about waste, books documenting each designer’s own experience with consumption and the trash it produces, and artifacts ranging from a hat crafted out of glass bottles and pistachio nuts to a piano keyboard refurbished from old computer parts.

CalArts created a blow-out performance piece with percussion instruments crafted out of coffee cups, an homage to the quilting heritage of our grandmothers, and spoken word. The CalArts team rethought their campus based on zero waste and sustainability goals.

ArtCenter aimed through their work to draw attention to the community garden on the Hillside campus, with the aim of revitalizing interest in it. The team’s presentation focused on carefully-crafted herb and garden boxes created from wooden pallets and designed to nest along either side of the landmark campus bridge.

Trophies for the event were made by LA artist Jackie Rabbit – out of junk! – and were a show-stopper all their own.

Mairead Delaney, who produced JUNK BATTLE! for NCompass in collaboration with Valerie Coleman, said, “I was completely blown away by what the schools produced – and by the thought and work the students put into it.”

Judge Kathy Schlein adds, “A number of teams produced prototype-worthy deliverables that could, with some tweaking, become the start of a new enterprise.”

We expect JUNK BATTLE! 2019 to expand considerably out of this prototype event.  One local municipality whose Chief Sustainability Officer attended the event is hoping to expand the competition to include teens in her area.

From the individual product designers to large corporations that mine, extract, and use precious (and finite) materials from our planet, to the average consumer, we need to inform, pressure, and change the narrative so that each and every player involved in the designing, mining, and purchasing can make better decisions to ensure a healthier planet for all living species on earth.

Marc O’Brien has been working with people who give a damn since 2009. He is the co-founder of The Determined, a creative studio for a climate-resilient world. He’s also an adjunct instructor at California College of the Arts in San Francisco, CA.