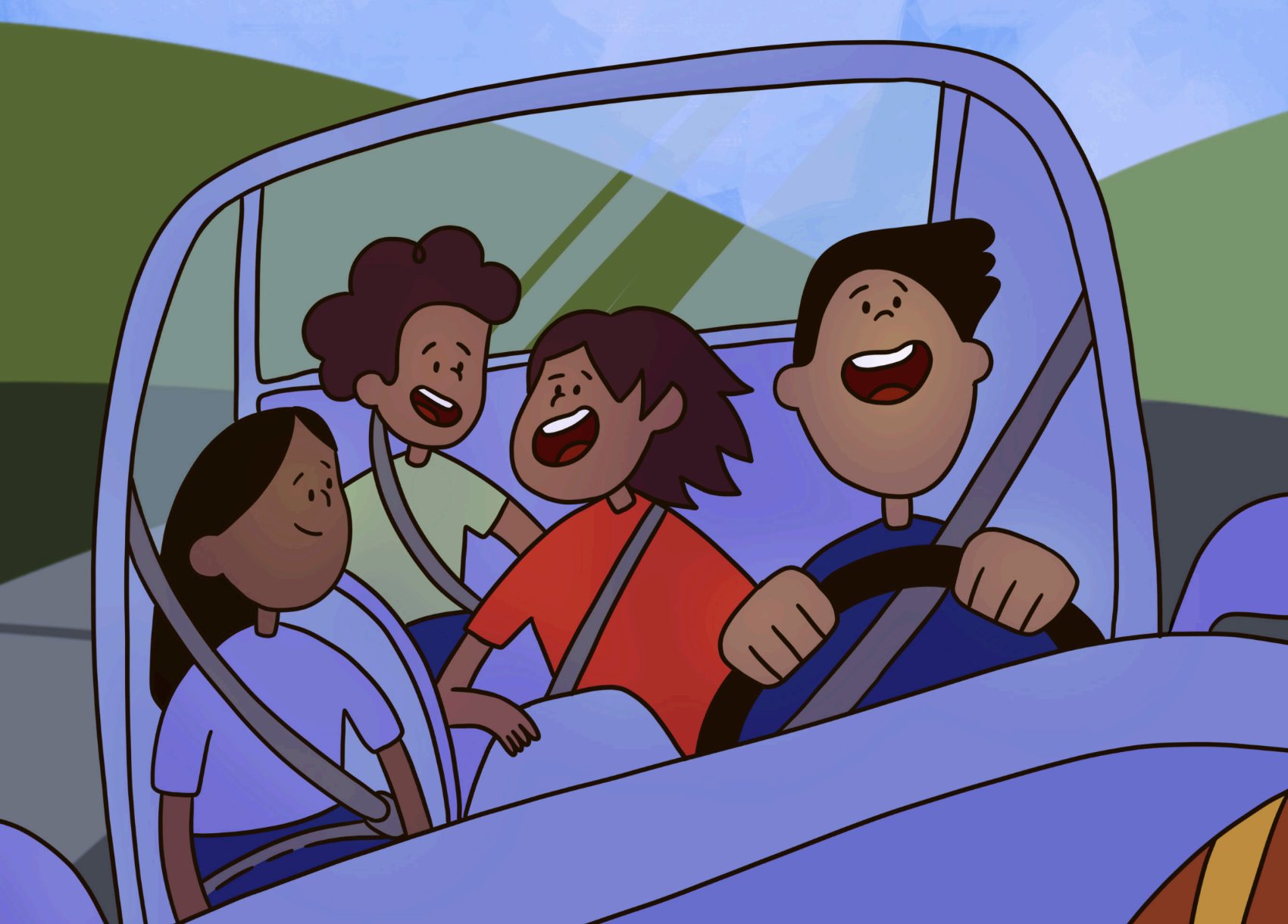 Cover art for The Family Car by Eric Wilson, illustration by Sydney Kysar.

Editor’s note: Eric Wilson is an educator who participated in our Magenta House program earlier this year, organizing three student teams from Manzanita School in Topanga. He has over twenty years of experience in education, with an MA in Teaching from New York University and a PhD in Education and Human Development from the University of Colorado, Denver.

Eric is also author of the Gracie Greene series of children’s books on sustainability. The newest book in the series, The Family Car, teaches kids all about EVs and their place in the future.

We sat down to talk with him about The Family Car, the role of education in sustainability, and why Magenta House matters.

PANDO: Welcome Eric! To start, thanks so much for sitting down with us.

Eric: You are welcome. It’s always a pleasure to talk about such important topics – the ones which often get swept under the rug, I guess for a reason. Climate change is scary stuff. And if it’s scary for adults, how much more so for kids?

You have quite an impressive resume of educational credentials and professional experience. Why are you working  directly with children instead of, say, teaching future teachers at the university level or doing something with policy?

Policy was never my passion. My PhD is in educational research, and my dissertation looked at the campus as a teaching tool.

But I believe that information acquisition and learning happen in a more spontaneous way than occurs in the classroom. I see an alternative vision of education developing that I want to be a part of.

They are the guardians of the future and they influence a lot of decision-making now. This is the arena where I most want to be.

Children also remind us of, or help us imagine at least to some extent, the way things “ought to be.”

They have an innocence about them but also an unfettered, uncompromising view of the world.

If they can place the Earth and the environment at the center of their perspective, which I’d say is natural to them, and keep it there, it can spur change in the sustainable direction we need things to go.

Educators are in a unique position to help them do this.

Kids have an interesting duality of being totally inexperienced and young to the world even as they can really hold on tightly to convictions that seem right or just to them.

In part, I think it has to do with the massive reserves of curiosity they have – curiosity, for instance, as to why adults don’t simply do the right thing. And of course they don’t necessarily have to deal with the full realities of the adult world.

A child, for instance, may be unfettered in their want to buy an EV. But they don’t need to think of finances, driving range, repairs, and the like. They just see EVs as the right choice and are unflinching.

I often think kids have the right idea before it gets schooled out of them.

Haha. With adults, it’s the opposite – allowing the child to flourish once again within them…

So, how did all of this lead you to writing children’s books?

I read books to my kids when they were really young and enjoyed the stories that children’s books told, as well as their visual nature.

Given my belief that children hold the key to a sustainable future, and feeling that there was a lack of good material, I wanted to try my hand at filling the void.

I guess it was something of a calling that I felt I needed to address.

Tell us about Gracie, the protagonist in your book series?

Gracie is a strong, female protagonist. She represents the hard work, curiosity, and inventiveness innate in humankind. She has a “can do” attitude.

I don’t have a daughter, but wanted to portray a self-assured, young girl in the lead role of the books. She is smart and kind.

She represents the kind of uncompromising child perspective you are describing?

Yes! Through her voice, she’s a fresh reminder to the adult world about why these sustainability issues are important and why we need to act on them, even if they seem inconvenient, impossible or pie-in-the-sky ideals.

At Pando we talk about the value of “thinking wrong.” Kids can give us the opportunity to do that, or at least to “think wacky.” A lot of listening is called for.

I think we would all benefit from more listening, adults and children alike.

Gracie is headstrong, but not arrogant. She wants to accomplish the tasks she starts. She respects her parents and listens to them, and they, in turn, respect her and listen to what she has to say.

When we fall into the trap of thinking we, as adults, have all of the answers, a certain myopia sets in and we struggle to see potential solutions.

Kids help open us up.

Kids are so fearless in their imaginations. Working in collaboration with adults who listen to them, they can affect a lot of positive change.

And they can learn early-on that they matter.

The receptive skills they develop are ones that go with them through life. When conflict arises, being able to listen to one another – deep listening – is a fundamental skill set that can overcome a range of difficulties.

But where does Gracie, and the influence of kids at large, fit into this conversation? I understand a kid having influence over their parents’ choice to be eco-conscious in small ways, but EV decisions are huge.

I overheard a child in a bookstore asking about a book on EVs, and this is what sparked the idea in my mind for this book in part.

My 9 year-old son has a distaste for ICE – the Internal Combustion Engine. I talked about that a little bit in an LA Times article earlier this year.

We often think of influence in the family as being top-down.  But influence of kids on their parents can be huge.

With sustainability, it’s not that you’re forcing the topic.

It really is something kids seem to be pushing on their own.

Exactly. Kids will inherit the earth from the previous generations. They have a vested interest in making sure it’s a healthy one.

EVs alone are not the answer, but they represent a better option. Gracie sees that.

Originally this wasn’t the next book in the series. But there’s something to be said about the “fierce urgency of now.”

So where does a program like Magenta House fit in with all of this?

Magenta House serves as a prime example of an educational program based on listening to young people and tapping into their creativity and curiosity.

Children are problem-solvers, as Gracie exemplifies. Magenta House fosters problem-solving skill sets to be used for a purpose – to create a more sustainable LA.

The program allows children to think outside the box. It gives them the opportunity to take an idea and run with it.

What part of the program really stands out for you?

In particular, the “think wrong” brainstorming session we had yielded a wealth of ideas  – growing from the kids’ own experiences. With many that are unparalleled in the adult world.

And then there’s the fact that the program offers an entire platform and toolkit students can use to meet and solve the challenges that arise in developing their projects.

I can’t emphasize enough how important it is to give young people a voice and a platform – along with the trust to develop their own ideas. It’s a vital step in their development.

Have you thought that Magenta House gives students the sorts of creative problem-solving opportunities you give Gracie Green in your books?

Yes! It puts them face-to-face with fundamental water and power challenges. It doesn’t get more basic than that. And it asks kids to start by identifying the problem.

We often forget about this in traditional education, but it’s a reason why project-based learning is so important. It empowers students by forcing them to find, grapple with, and solve a problem with no clear answer – instead of being told the problem from the beginning, with the implicit suggestion that there is a “right” way to solve it.

It’s the listening balance we talked about earlier. It requires giving autonomy and power to young people.

It makes them feel not only like their ideas matter but also that maybe things can change.

It’s a powerful idea for young people to have – for any of us to have.

Totally. Many kids have never heard the message of empowerment. We tend not to treat students with much respect.

We say, “when you grow up, you can do x,y or z.” But, we often forget that, maybe, if this is all kids hear growing up, they will simply lose their imagination, hope and creativity instead of “saving” it for later.

Yes, Magenta House flips this equation on its head and gives kids the ability to take an idea and run with it.

Remember that tons of kids want to PARTICIPATE in the solutions to our world’s problems. They really do – and not just learn about them.

Magenta House does a great job of inspiring that, and grounding their participation, and making it meaningful. And, even, fun!