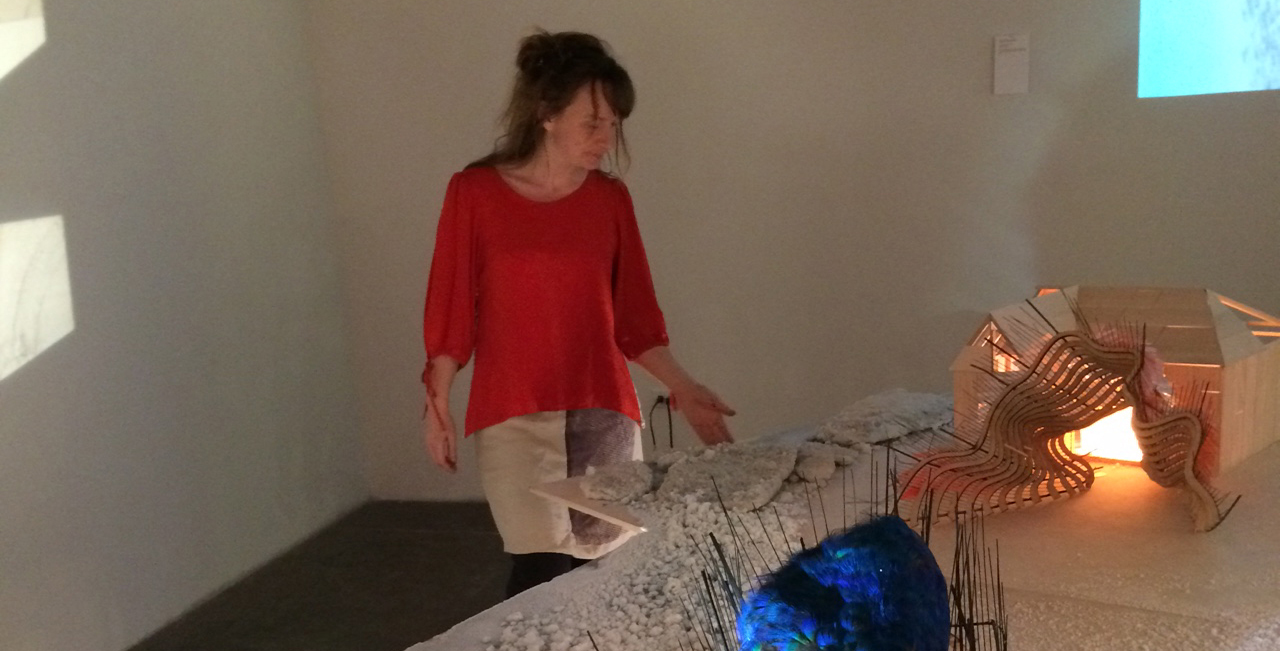 Pando’s Rich Binell reached out to Berenika Boberska, architecture professor at Woodbury University and head of the Hinterland Institute, about her involvement in Pando Days 2019/20 and the project she designed that uses encroaching sea water to create gardens of saline-friendly plants and forests.

Read on to learn about what she’s teaching and doing that matters to them, to Pando, to Los Angeles, and to the world.

What we found is predictably astonishing, and inspiring.

After working in Frank Gehry’s LA office for 8 years, Professor Berenika Boberska needed a new challenge. Soon, she became a professor at Woodbury University and, a short while later, discovered a hidden sea battle going on under the streets and homes of Los Angeles:

It’s the underground invasion of seawater that LA is quietly fighting by pumping fresh water through 300 to 400 injection wells across 20 miles of the city. It’s a big engineering undertaking that’s turned into an environmental war that Los Angeles has been fighting—day and night—since the ‘50s.

Why is this important?

It’s important to protect our underground aquifer, because it can store up to one million acre-feet of fresh water—more than our largest Southern California reservoir.

The original plan was simple, but destined to fail: Continually inject fresh water into the aquifer, mostly at night, as a kind of water-based barrier up to 700 feet deep below LA, to keep the salt water out.

To do that, we either use expensive recycled water, or water imported 200 miles from the Owens Valley to pump into the ground.

How is that working?

“Worse, we know that the freshwater we pump out of the ground to live on and drink will eventually be polluted by salt water.”

“And,” says Berenika, “we rely on these wells for everything from showers to car washes, and for farmers to grow our food. But, if what we pump from the ground is contaminated by saltwater, it’s undrinkable, and will eventually kill our plants.”

Berenika connected some ideas: We have to do something about this battle. LA was made up of saltwater marshes before it was developed—a saltwater desert. So, what if we could embrace the salt water—at least in some places—instead of fighting it? What if we could find places and things to grow with the salt water?

How can you get students to join the fight?

Berenika invented a course called “Swamps, sumps, and the forests of Torrance.” Encouraging her students to “think wrong,”she asked them some important questions.

Is there a space for a saltwater forest in Los Angeles? Could saltwater botanical gardens be built? Would they survive? Could we farm using salt water?

Her students supplied more questions: Can we pump the salt water to the surface of the city? Can we make a green necklace for the city, turning grasslands into swamplands? Can swamplands be beautiful?

They analyzed and researched and looked at native plants that could handle salt water, and they discovered some amazing things:

Yes. You can actually grow edible seawater salads. Yes. Humans have done this forever, but have mostly forgotten how. Yes. To succeed you have to involve everyone from gardeners to chefs.

You have to connect the botanists and scientists and the engineers who keep the pumps running.

For Pando Days 2019/20, professor Berenika worked with her students to actually design saltwater gardens. Noticing the current solution of a freshwater “sea wall” as non-sustainable, she and her students decided to not fight the saltwater invasion but, rather, to work with it. They are thinking about saltwater forests, gardens, anything that can thrive in our new environment. The sky, or, rather, the sea is the limit.

Says Berenika, “If you pump the salt water out and find ways to use it, you will also help stop the saltwater intrusion. We have to learn to work with it—and make it work for us.”

Today, her students are analyzing where the city’s wells are, and where new saltwater parks could be.

The first ones in a city, anywhere.

And she’s picked up seed funding to do it.

“We want to make experimental gardens that can grow, and be replicated. “The thing is, architecture isn’t necessarily about buildings. It’s about open spaces where people can meet. It’s a room that’s open to the sky. A clearing in a forest. Public spaces. Gathering places.

“It’s about turning a problem into something valuable—a saltwater garden, the kind that were probably here a thousand years ago.

“And I want to help my students to bring that garden back to the city.”

Rich Binell is a writer, brand strategist, and corporate storyteller. He helps companies understand and explain why they matter.