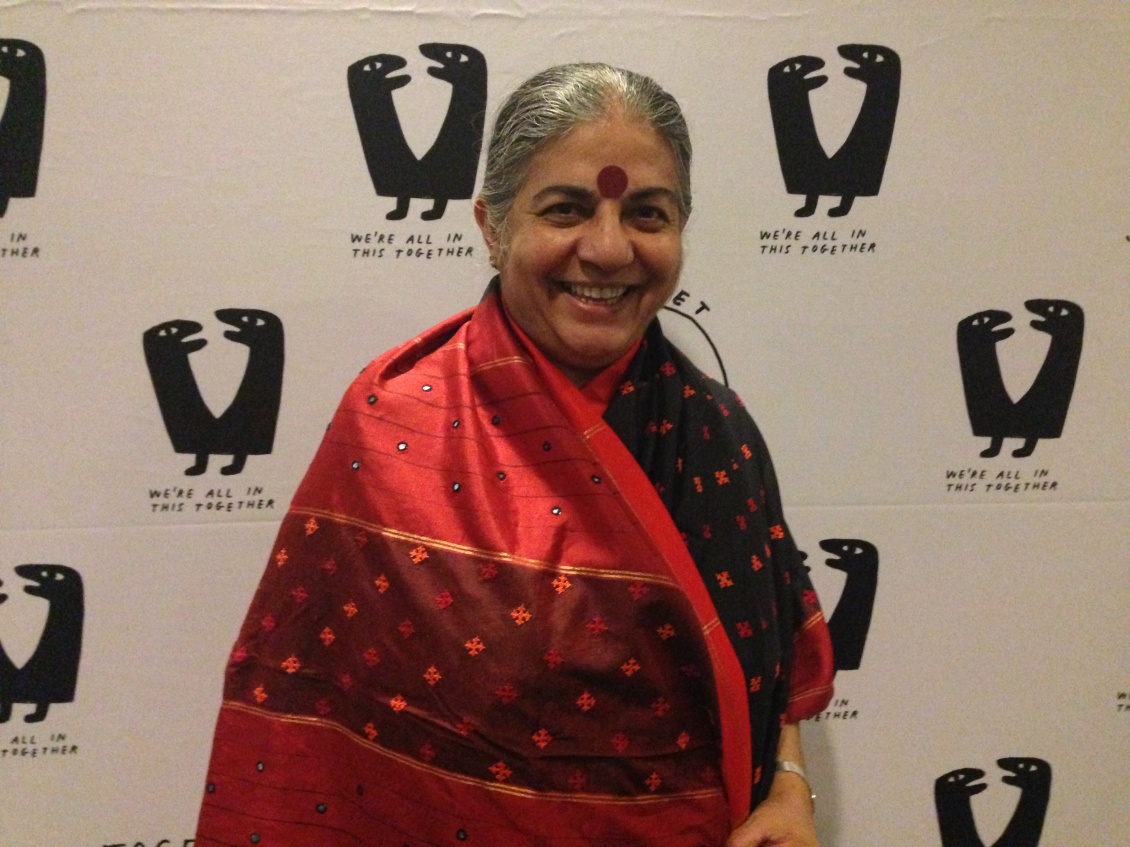 Vandana Shiva in front of Tucker Nichols’s, “we’re all in this together,” Los Angeles, June 2015.

Most reports in the press of Pope Francis’s Encyclical, Laudato Si‘, before its formal launch, reduced this path-breaking document with 246 paragraphs on the contemporary ecological crisis and human crisis to the four paragraphs on climate change (para 23-26). But Laudato Si’ is much wider and much deeper.

It is first of all a call for a change in consciousness and a world view from the the dominant paradigm of the domination over nature and its destruction to one where we see the Earth as our Mother as our common home.

The Laudato opens with St Francis’s prayer, “Praise be to you my Lord, through our sister, Mother Earth, who sustains and governs us, and who produces various fruits with coloured flowers and herbs.” This resonates so deeply with the Indian philosophy of Vasudhaiv Kutumkan, the Earth Family. It resonates with the contemporary movement for the Rights of Mother Earth. It resonates with cultures and faiths across the world.

The encyclical is an invitation to “a new dialogue about how we are shaping the future of the planet” and this includes biodiversity, air ,water, oceans. It is clear that “to protect our common home we need to bring the whole family together.”

The Encyclical goes on to say, “This sister now cries out to us because of the harm we have inflicted on her by our irresponsible use and abuse of the goods which God has endowed her with. We have come to see ourselves as her lord and masters, entitled to plunder her at will. The violence present in our hearts, wounded by sin, is also reflected in the soil, in the water, in the air, and in all forms of life.”

Soil is referred to frequently, including in the contributions of soil and land degradation and deforestation to climate change. And the Pope reminds us that “we have forgotten that we ourselves are dust of the Earth. (Gen 2:7). Navdanya’s manifesto Terra Viva released at the Expo in the Year of Soil is a celebration of Soil as the basis of our lives, of “humus” as the root of “human.” We are the soil.

The Laudato is very critical of the privatization of water, and the idea that life forms are just mines of genes useful to business. “It is not enough to think of different species merely as potential “resources “to be exploited, while overlooking the fact they have value in themselves.” The intrinsic worth of all beings and all biodiversity is the ethics on which Navdanya is founded. That is why we say there should be “No patents on Seed “ and “No patents on Life.”

The Laudato is cautious on the question of GMOs, but does point to the threats to small farmers. And it indicates that through biotechnology and knowledge related to DNA a handful of interests are controlling the fate of the Earth and humanity. “It is extremely risky for a small part of humanity to have control.” Everything that will shape our freedom and survival is addressed in the encyclical. “…our freedom fades when it is handed over to the blind forces of the unconscious…of violence.”

Among the blind forces of the unconscious are the idea of infinite unlimited growth, of technological fundamentalism without precaution, assessment and responsibility of anthropocentrism. “The technological mind sees nature as an insensate order, as a cold body of facts , as a mere ‘given,’ an object of utility, as raw material to be hammered out into useful shape. The intrinsic dignity of the world is thus compromised.”

Nature is not dead matter, she is alive. And when we destroy nature, she can destroy us. Our greed, our arrogance is blinding us to this basic reality that women, small farmers and indigenous cultures have understood. Diverse movements will be empowered by the encyclical. The only ones who are threatened are those who would like to continue to try and establish their empire over the entire planet and the earth’s resources, privatizing the commons, pushing free trade agreements like TTP and TTIP, destroying democracy and people’s rights, and destroying the earth that sustains us. And stupidly and recklessly, they call this destruction “economy.”

But economy is derived from “Oikos,” our home, and refers to management of our common home, the theme of the Encyclical. The selfish and narrow minded who have commented that the Pope should not interfere in the economy have deliberately forgotten, or distorted, what the economy is.

The encyclical helps us remember that it is about love and care, not exploitation, greed and destruction. It observes that the “Degree of human intervention often in the service of business interests and consumerism is actually making our Earth less rich and beautiful, and ever more limited and grey.”

It is by bringing beauty, true wellbeing and the joy of living in harmony with nature to the center of human concern that the encyclical awakens our deeper humanity and consciousness. Being human is not worshiping the “god of money” or tools of technology or the myth of progress defined as the conquest of nature and people. Being human is to be deeply aware of all beings who share this beautiful and precious home with us.

The Laudato is based on integral ecology — the interconnectedness of ecology, society and economy. This is the interconnectness we tried to explore in Terra Viva. In integral ecology, sustainability and social justice are inseparable. As the encyclical states, “a truly ecological approach becomes a social approach: it must integrate questions of justice in debates on the environment, so as to heal both the cry of the earth and the cry of the poor.” This for me is Earth Democracy.

Vandana Shiva is the internationally-recognized environmentalist and recipient of the 1993 Alternative Nobel Peace Prize (the Right Livelihood Award) and the author of several bestselling books.