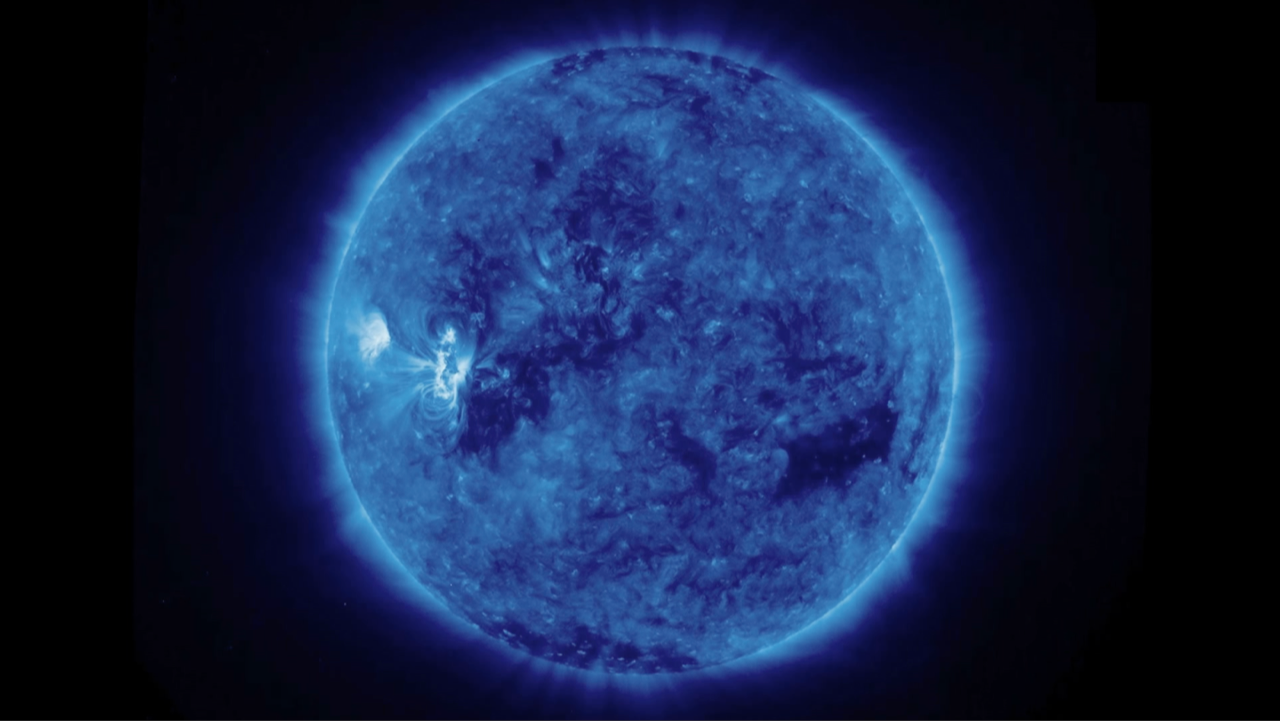 The sun, as seen through an ultraviolet imager.

Designer Rebeca Mendez spoke at JUNK BATTLE! on April 20 at the LA Cleantech Incubator. These are her remarks.

Many of us here consider ourselves as storytellers, perhaps even myth makers. Origin stories are powerful. We need, as living beings, to understand who we are and where we came from, to place ourselves in stories and in history.

If in school we keep teaching that history is divided between American history, Mexican History, Chinese History, we are teaching our kids that they are divided into tribes, emphasizing our differences, specifically our ethnic and racial differences, which is proving to be inadequate. If we keep teaching that in the classification of the natural world organisms are not only divided between animals, plants, or single-celled life forms, but we emphasize rank, we underline not only our difference, but primarily the human domain over all other species (although I think bacteria and viruses are quickly taking the lead).

And if in our homes and our spiritual leaders keep repeating an arcane and destructive story where humans “rule over the fish of the sea, and over the birds of the sky, and over the cattle, and over all the earth, and over every creeping thing that creep on the earth,” we not only emphasize our differences, but we instill in our young the entitled, destructive and extractivist mind that continues to cement our current economic model that is failing us in so many ways, and is at war with life on Earth.

For the past 20 years, I have dedicated great part of my research, practice, and teaching to the pursuit of alternative stories, because as story tellers we have an opportunity to change the conversation and to fight for different models, ones grounded in racial, gender, economic, environmental and multi-species equity and justice.

I’ll share three alternative stories that continue to captivate me.

One is the current discourse on “sustainist design,” a concept proposed by the cultural theorists Michiel Schwarz and Diana Krabbendam, in which “sharing, localism, connectedness and proportionality are creating a new agenda for social design,” and in which design is judged not only for its form and function, but also for its social and environmental impact.

Two is to tell a story of self-in-relation, not only at a planetary scale but also within the history of the universe, what American historian David Christian calls Big History. In a 13.8 billion-year history of the universe, humans have only existed in the world for 200,000 years. This represents the last millimeter of the last sheet in a 400-sheet toilet paper roll.  As long as we don’t have a sense of this Big Story, it will be very hard to understand ourselves as humans, and that we share urgent problems that we need to work together with.

Three is a post-humanist story, where we consider the ethical implications of expanding the circle of moral concern and extending subjectivities beyond the human species. It is broadly known that we are biologically very close to plants and nearly identical to our animal cousins.  Science and Technology Studies professor Donna Haraway, in her book, When Species Meet, writes:

I love the fact that human genomes can be found in only 10 percent of all the cells that occupy my body; the other 90 percent of the cells are filled with the genomes of bacteria, archaea, fungi, protests, and such, some of which play in a symphony necessary to my being alive at all, and some of which are hitching a ride and doing the rest of me, of us, no harm. I am vastly outnumbered by my tiny companions. . . . To be one is always to become one with many.

As storytellers who hold the power of global media dissemination, we have an opportunity to contribute to and change the conversation around a host of issues, including immigration, the environment, gender and racial justice, and so many others. This is a time when circumstances are calling on everyone to engage, and I believe that we, as creative thinkers and communicators, must respond in the face of prejudice, find our voice, and make an especially powerful contribution to a better society.

UCLA’s collaboration with Pando Populus is a wonderful step in this direction. I thank all the students for their passion and commitment to REFUSE, REDUCE, REUSE, REPURPOSE, ROT AND RECYCLE, for a more just and healthy planet.

Rebeca Méndez is an artist, designer, and professor at UCLA's Design Media Arts Department. Her work has been exhibited and collected by institutions such as the San Francisco Museum of Modern Art, The Stedelijk Museum in Amsterdam, Museo Jose Luis Cuevas in Mexico City, El Paso Museum of Art and the Cooper-Hewitt, National Design Museum in New York City.