“Thank you for inviting me! Pete Seeger” 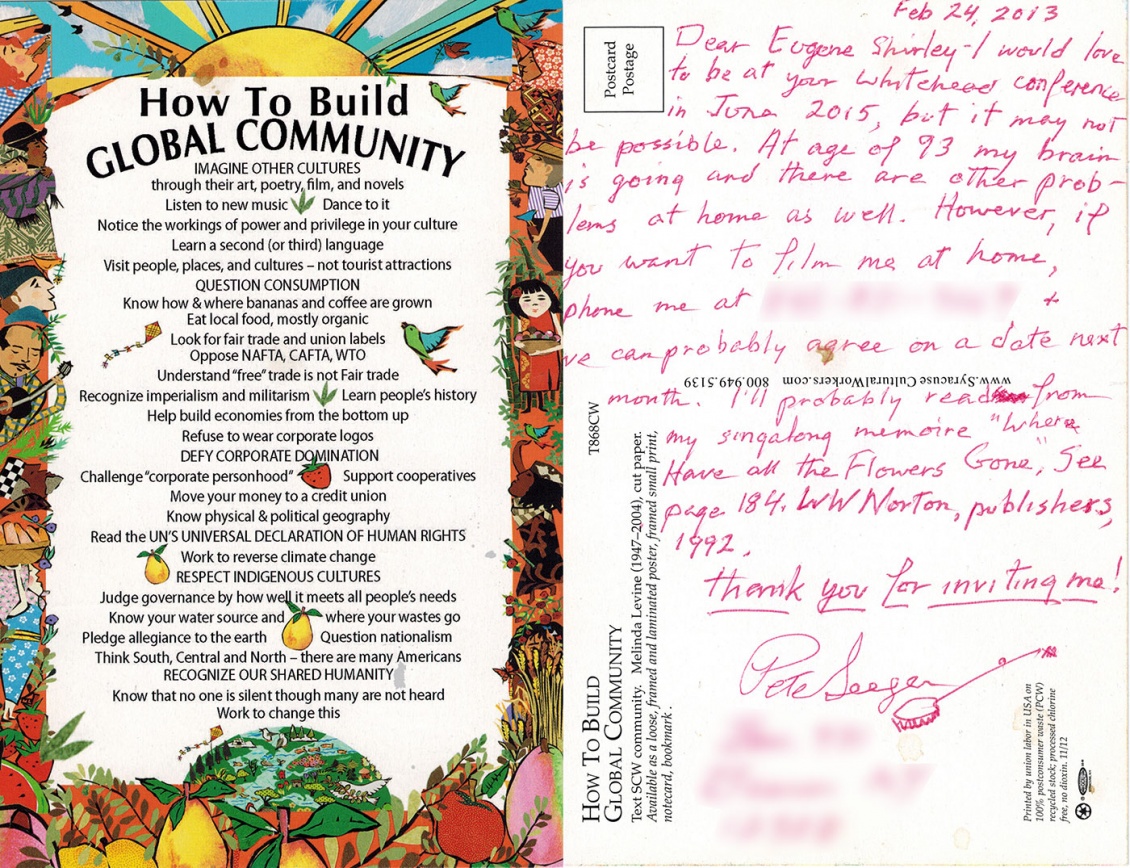 “Thank you for inviting me! Pete Seeger”

Pete Seeger may be gone, but he will be with us for our inaugural conference this June.  He was concerned that he might miss the event, and suggested that we videotape him in case he wouldn’t be able to be with us.  A crew of talented filmmakers captured him on camera at his home on the banks above the Hudson River, a few months before his death. The material they collected will be used in a short documentary salute before Bill McKibben’s keynote address and open our “Seizing an Alternative” conference.

It turns out that the legendary folk singer and defender of the Earth and its people was a fan of Alfred North Whitehead, the philosopher who put ecological relations at the heart of things and whose work serves as inspiration for our June event.

“You have to come hear this man”

I don’t think anyone in the Whitehead community knew of the Seeger connection.  I only found out by accident, in the course of commenting on Andrew Revkin’s DotEarth blog in the New York Times, which I (and hundreds of others!) would occasionally do.  I forget now what caused me to write a comment, but I inserted some Whitehead reference that at the time seemed appropriate.  Surprisingly, Revkin wrote back, commenting on the fact that I was interested in Whitehead, and asked if I knew that Pete Seeger was fond of the great philosopher, too.  Some months earlier, Revkin had interviewed Seeger and Seeger was quoting Whitehead to him then, according to Revkin.

So I did what anyone would do:  Googled Pete Seeger’s mailing address and sent him a letter telling him about all that we’re up to (we hadn’t come up with “Pando Populus” as a name yet, though I bet he would have liked it).

He responded very quickly, and sent me the postcard I’ve attached to this post. I then spoke to him a couple of times on the phone after that, and a few months before he died, Louis Alvarez, Andy Kolker and Peter Odabashian from the Center for New American Media spent one Saturday afternoon with Seeger at his home taping him on our behalf, and capturing what was surely one of his last for-the-public renditions of “Where Have All the Flowers Gone?”  (He also sang a stanza in German, for good measure.) Long-time documentary director of photography and editor George Adams is editing the footage.

Seeger told me that he first heard about Whitehead when he was 16 years old, from his older brother who was a student at Harvard at the time and enrolled in a philosophy class taught by Whitehead.  His brother said something along the lines of, “You have to come hear this man” and invited him to class one day to sit in the back of the room.

Seeger recalled to me on the phone that Whitehead was talking about the issues of the day, specifically Franklin Roosevelt’s packing the Supreme Court.  Whatever he said, the old philosopher must have made an impression, because even at the end of his life Seeger was fond of quoting Whitehead, as he did for Revkin’s New York Times interview, for me on the phone, and on camera.

Take a look at the attached postcard that Seeger sent me.  The face of it distills a lot of wisdom about right-living in the contemporary world.  It looks pretty Whiteheadian to me, without an explicit reference to Whitehead.

You’ll see that Seeger ended his note with, “thank you for inviting me!“

Thank you, Mr. Seeger.  And thank you for making sure that, one way or another, you could be with us in June for the opening night of “Seizing an Alternative.” The assumptions you challenged are ones we aim to challenge.  The most important alternative you kept alive is that there is an alternative, still.

The premiere presentation of the documentary short film “Thank you for inviting me! Pete Seeger” will open the Pando Populus inaugural conference on Thursday, June 4 at 7:00 pm at Bridges Auditorium, Pomona College, prior to Bill McKibben’s keynote address and response by Vandana Shiva.