Inner Life of a Bushtit 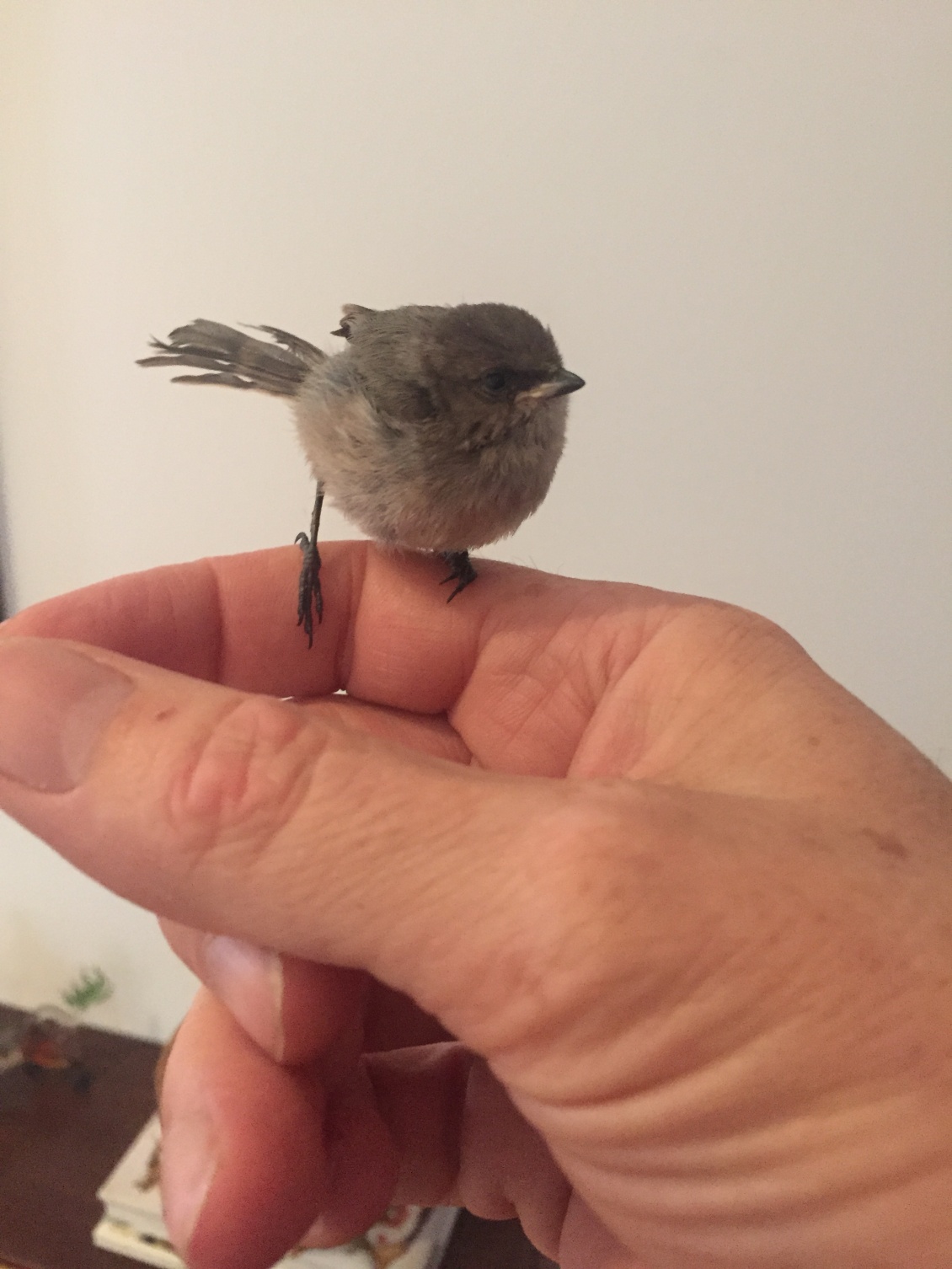 Full-fledged bushtit on the author’s finger. Bushtits are not much larger than hummingbirds.

Inner Life of a Bushtit

The New York Review of Books has been publishing a lot of articles recently for people interested in fundamental assumptions. Here’s one, from the October 8 edition: “The Amazing Inner Lives of Animals,” by Tim Flannery.

It is written in response to two new books out about animal behavior: Beyond Words: What Animals Think and Feel, by Carl Safina; and The Cultural Lives of Whales and Dolphins, by Hal Whitehead and Luke Rendell.

Growing up in Oklahoma, I was raised with lots of animals. And my mother always was – and still is – a great believer in sub-verbal communication with them. But even so, at some point along the way a good degree of my own animal empathy got “educated” out of me at school and whatnot.

These two books reviewed by Flannery put heart back into the animal world with stories of astonishing behavior that mimics our own emotional and ritualized lives.

Who knew, for instance, that killer whales follow something akin to tribal dietary restrictions (various pods, for instance, will only eat salmon – or even certain species of salmon – while others only eat seals)? Or that they engage in food-related rituals (those same salmon-eating killer whales might, under extreme conditions, venture to eat salmon of another species but only after performing a quite-specific ceremony)?

That elephants engage in funeral rituals is fairly well-known, but you will be astonished to read about dolphins forming “an aquatic escort” when a scientific researcher they had come to know over the years died onboard ship. Flannery comments:

The remarkable incident raises questions that lie at the heart of Carl Safina’s astonishing new book… Can dolphin sonar penetrate the steel hull of a boat—and pinpoint a stilled heart? Can dolphins empathize with human bereavement? Is dolphin society organized enough to permit the formation of a funeral cavalcade? If the answer to these questions is yes, then Beyond Words has profound implications for humans and our worldview.

Flannery points out that stories like these challenge scientific methodology. He goes on to say that Carl Safina, author of Beyond Words,

…would be the first to agree that anecdotes such as Herzing’s [dolphin funeral rite] lack the rigor of scientific experiments. He tells us that he is “most skeptical of those things I’d most like to believe, precisely because I’d like to believe them. Wanting to believe something can bias one’s view.” Beyond Words is a rigorously scientific work. Yet impeccably documented anecdotes such as Herzing’s have a place in it, because they are the only means we have of comprehending the reactions of intelligent creatures like dolphins to rare and unusual circumstances. The alternative—to capture dolphins or chimpanzees and subject them to an array of human-devised tests in artificial circumstances—often results in nonsense.

The example Flannery references is the long-demonstrated “fact” that dogs can be directed by human beings pointing things out while wolves cannot. The evidence, apparently, came from comparing caged wolf behavior to that of dogs – without taking into account the effect of the caged environments on the wolves. Studied in the wild, wolves respond to the gesture of pointing as readily as dogs do.

Much published behavioral science, incidentally, is phrased in a neutral language that distances us from animals. Safina argues that we should use a common language of grief, joy, friendship, and empathy to describe the equivalent responses of both human and other animals. To this I would add the language of ceremony: What other word but “marriage” should be used to describe the ritual bonding, followed by lifelong commitment to their partners, of creatures like the albatross?

Sometimes it is the small things that best reveal shared life experience. When baby elephants are weaned they throw tantrums that rival those of the wildest two-year-old humans. One youngster became so upset with his mother that he screamed and trumpeted as he poked her with his tiny tusks. Finally, in frustration, he stuck his trunk into her anus, then turned around and kicked her. “You little horror!” thought [researcher] Cynthia Moss as she watched the tantrum unfold.

The scientist Rupert Sheldrake has long tried to open the door of science in just the directions that Flannery is describing – and has been pilloried for it. Most recently, he wrote:

An unprecedented change of mood is taking place in mainstream science. There is a new and unfamiliar humility. In part this has been brought about by the ongoing crisis about the reproducibility of scientific results, the roots of which I discuss in Chapter 11 of my book The Science Delusion (UK) and Science Set Free (US).

Scientists traditionally assumed that scientific findings were objective because they could in principle be replicated by any competent investigator, anywhere and at any time. But in the last few years it has become increasingly apparent that many scientific findings cannot be replicated – indeed in fields like biomedicine and psychology the majority cannot be reproduced by other investigators. A recent article on this problem in Nature, the world’s leading scientific journal, Reproducibility Problem is illustrated by a cartoon of the temple of science crumbling…

In the current issue of Nature, there is another welcome sign of change. A article entitled:“Consider all the evidence on alternative therapies” concludes “instead of rejecting such approaches wholesale, let’s learn from them… We must tease out the real active ingredients of these therapies – things such as ritual, mental imagery, empathy, care and hope – so that we can learn how they work and find ways to incorporate them into patient care.”

Anyone who was at our SEIZING AN ALTERNATIVE conference in the summer would find the sorts of ideas that Sheldrake and Flannery are talking about in line with conference tracks that highlighted rethinking the nature of nature and the human-nature continuum, along with the kind of worldview that all this implies.

Over the summer, I got drawn back to the sort of early childhood feelings about nature I’d not experienced for a while when I came upon a hopelessly naked baby bird by the sidewalk in my neighborhood. I took it home, used one bent tong of a fork to glob food onto, and stuffed a worm-egg-cat food mixture down its throat day and night (and throughout the night).

Quills pushed through and became grey and black feathers. But what I thought would grow up to become a mockingbird stayed small: a bushtit, not much larger than a hummingbird. Bird rescues wouldn’t take it (bushtits are too common in Los Angeles). It was way too young to be released back into the wild; its nest was destroyed. It became family, even though I knew that the longer it stayed in our home, the harder it would be for it eventually to adapt out-of-doors.

But over the time it was with us, we got to understand what some of its chirping sounds meant and the complex patterns it enjoyed – not simply high-pitched monotony, as I’d associated with the bushtits I’d heard high up in the trees, but a lot of variation in beat, tone, and composition I’d never been able to really listen to before. And emotion: from mad to happy to purring like a cat. We fell in love with it and, honest to god, I think it felt love for us. We learned a chirp is not just a chirp, and a bushtit not just a bushtit.

Somewhere, Alfred North Whitehead says that love reminds us that the universe is a friendly place. He was speaking of human-human love. But the same seems true of human-animal love. And animal-animal love, surely.

Flannery flags us to things like dolphin funeral rites and killer whale dietary rituals to remind us that the universe is not the machine we’ve been taught it is. The point was re-enforced this summer to me by a baby bushtit.

Eugene Shirley is founding president and CEO of Pando Populus and a long-time social impact entrepreneur.