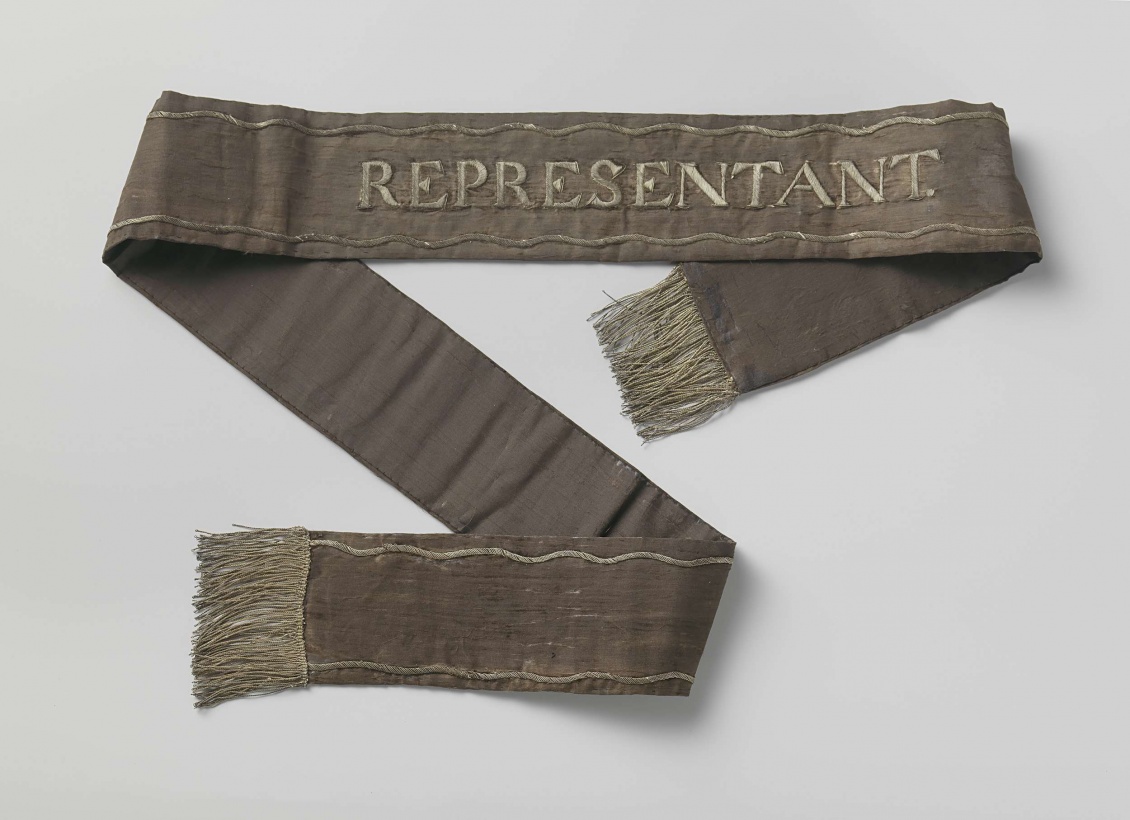 “Representative,” once the velvet sash of a member of parliament (Batavian Republic), c. 1798. Now a museum piece behind glass at the Rijks, Amsterdam.

The so-called “trade agreement” that is the Trans-Pacific Partnership (TPP) was negotiated in secret with extensive participation by corporations and none from workers or from the wider public. Even when Congress was asked to vote on fast-track for the agreement, the news media gave it very little attention. Although opposition mounted as information about its contents gradually seeped through, Congress voted fast-track as instructed last summer even without having a chance to study the entire document. Secrecy worked.

Since, in the past, agreements that have gained fast-track status have been implemented, most of us thought that this ended the possibility of stopping TPP. Indeed the vote for fast-track included subsequent trade agreements; so the corporate world seemed secure in getting whatever it wanted over the next few years, however damaging that might be for the American public and the prospects of an ecological civilization.

Subsequent developments have raised the possibility that the situation has changed. As more and more has been learned about the sacrifice of national sovereignty to the corporate world, public opposition has mounted. To the best of my knowledge, no candidate for president has defended TPP. Hillary Clinton, who was an important part of the administration that negotiated it and had seemed to be a solid supporter, came out against it. If her opposition is serious and she uses her influence with the power brokers in the Democratic Party, she could probably prevent its passage single-handedly.

That is very unlikely. Clinton will be glad to have TPP passed soon to insure that it not be an issue she must face. Most of those who voted for fast-track are still expected to vote for the TPP when it is submitted by Obama, despite its unpopularity with the American people. Ironically, the fact that no one running for president is supporting it helps its supporters by keeping it from being a topic of debate. Obama and his bi-party supporters in Congress will try to get it passed with as little fanfare as possible, hoping that voting for it will not damage their political standing. The president will submit it to Congress whenever he and his corporate supporters think the votes are securely lined up.

Nevertheless, their success is not the foregone conclusion most of us had supposed. Opposition continues to mount. The news blackout cannot be as fully sustained as last summer. The Tea Party may organize vigorously against the TPP, since it cuts against all their principles. Sanders’ opposition is serious and widely supported by authentic progressives who want to work against corpocracy. Nationalism is not dead, and some of our representatives will not want formally to surrender the sovereignty of the United States to courts run by transnational corporations. Despite the importance of corporate support, congresspersons also fear voting visibly against the wishes of the people they represent. Recently, money seems not to control voters as much as in the past. Opponents are better organized now than they were last summer. There is a chance that the House will not provide even the simple majority now required for passage.

My prediction is that we opponents will not succeed. We have no influence on when TPP is brought to Congress for a vote. The lobbying for it will have virtually unlimited money at its disposal, along with the “logic” that what is good for corporate interests is good for the world. The public is easily distracted by news – including news of terror events that, however tragic, don’t rise to the importance of the kind of structural terror that could be unleashed by global agreements that elevate trade beyond the common good. If the stock market continues to fall, we will be told that TPP is essential to restore confidence in the economy. “National security” may even be claimed to be at stake. Since corporations have enormous influence over both the president and the media as well as many of our representatives, including (but certainly not limited to) the shaping and sustaining of fundamental assumptions that dictate what is “reasonable” for public discussion, they are in good position to blitz their way through public opposition.

But we who seek an ecological civilization have a chance. That fact is newsworthy. The tide may be turning toward supporting the public interest. Perhaps DEMOCRACY has a future.