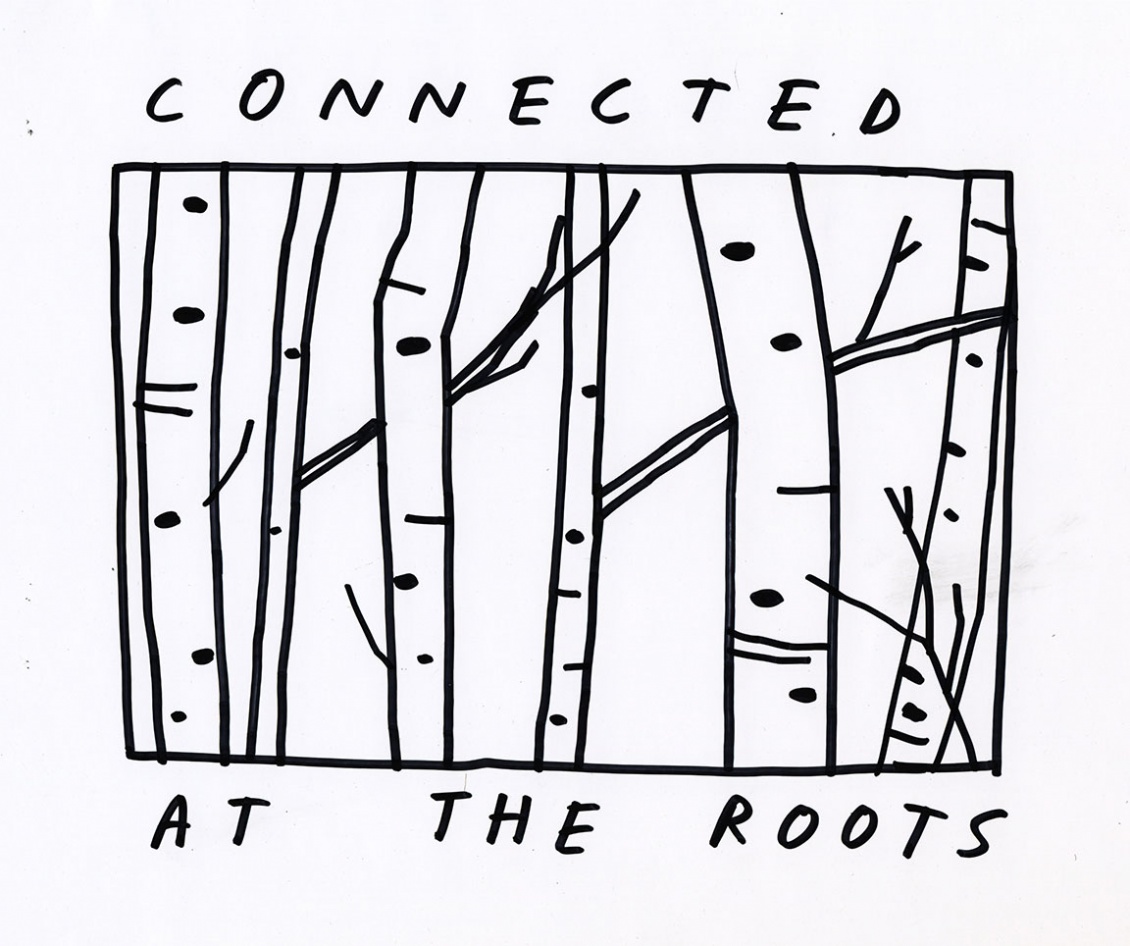 “Connected at the roots” by Tucker Nichols.  Copyright (c) 2015 by the artist.

In my pocket, all my waking day, I carry a device that enables me to communicate instantly with practically anyone around the globe. I’m a cog in a vast international system of manufacturing, trade, and consumption. Sure, we’re all connected in these ways. But in our face-to-face encounters with other people, or when we walk in wilderness and commune personally with other living beings, we sense this connection in a much deeper way.

A few days ago, I hiked up the trail to Dream Lake in Rocky Mountain National Park to officiate the wedding of two USC student friends. It was just the three of us: they will hold a family event to celebrate at a later date. They wanted to make their vows to each other in a place that was especially meaningful to them. Both the bride and groom are outdoor enthusiasts and lovers of the mountains. The granite ridge-line up to Long’s Peak loomed precipitously above the lake. We found a sun-spangled mossy rock upon which they could stand next to the water to share their vows. I stood on a fallen tree half-submerged by the lake. (I called my address to them the “Sermon on the Log.”) As our ceremony proceeded, they felt bonded as never before: I could see it in their glowing eyes. I felt bonded to them as never before, as well. And the three of us felt like the natural environment around us was not just the backdrop for their wedding, but integrally a part of it.

Right after I held their hands and pronounced them wife and husband, a mighty whoop rose up from the other side of the lake. We had not been aware that about fifty hikers on the other shore were paying rapt attention to a moment we thought was intimate. They cheered the couple with lusty yells, and big grins spread across the faces of the groom and the bride. We were all connected.

At the recent “Seizing an Alternative” conference, nearly 2,000 people from around the world, many from China, were there to learn from each other about how academics, religious people, and environmental activists can cooperate in building an ecological civilization. Wandering the spacious, leafy campus of Pomona College, with Mount Baldy’s steep outline framing the scene, made me sense the depth of my connection to all people whose hearts burn within them to save our precious planet.

The event began with the showing of a video of a soliloquy by Pete Seeger, the folk singer, at his rustic homestead up the Hudson River, shortly before his death. He talked about his own fascination with process thought. His brother, a student at Harvard in the early 1930’s, had been riveted by a lecture by Whitehead. In his failing voice, he sang a cheery tune with foreboding lyrics about the future of the world. This was a perfect introduction to the talk by Bill McKibben, the leading activist fighting climate change in America. He presented the bad news in a way that made us want to go forth and create good news. (Watch the Seeger video here; see other conference videos on the Pando YouTube channel and follow new ones as they go up.)

I was the chair of the section on “Reimaging and Reinventing the Wisdom Traditions,” so I visited some of its “tracks” devoted to topics related to the Abrahamic religions. In one, I was entranced by Rebecca Parker’s talk on themes from the book she wrote with Rita Nakashima Brock: Saving Paradise. She is the former head of Starr King School for the Ministry, a Unitarian seminary in Berkeley. Some Jesus Seminar biblical scholars suggest that the Catholic Church was thoroughly co-opted as an instrument of Roman imperialism by the fourth century, and with that development it became more focused on ritual and dogma than on experiential spirituality. Rebecca and Rita paint a more nuanced picture. Using slides of early Christian iconography, Rebecca described a church that kept its “earthy” spirituality for much longer. In one example, she revealed how Cyril of Jerusalem, a fourth-century theologian, described and interpreted the elaborate ceremony of baptism at the time. The ceremony, and the long process of preparation for it, were full of beautiful references to nature. Cyril said that water is the sign of the Spirit because it adapts and transforms into all living things. Biodiversity is thus a sign of the Spirit, and monoculture is a sign of its opposite. Rebecca argued that Christians need to reclaim the embodied spirituality that suffused early Christianity, as a way to feel part of nature and thus committed to its preservation.

At the track on Mormonism and ecology, I listened to a lecture by Rachel Whipple, who described herself afterward as a “Provo housewife.” I never would have guessed she’d use that identity as I listened to her erudite talk, which wove together references to philosophy, environmental science, and Mormon scripture and doctrine to reveal a theological basis for Latter Day Saints to join the fight against global warming. She’s a leader in the LDS Earth Stewardship movement. LDS doctrines teach that the world was created by a committee including Jehovah, Jesus Christ, and Michael, who was a manifestation of Adam. Since we humans were engaged in creating the world, we ought to be engaged in preserving it. “Restoration” is a major theme in Mormonism: the church claims to be a restoration of the original early church. Mormons have a responsibility to restore the earth, as well, she said. LDS doctrine says that God and his wife started out as physical human beings but went through a spiritual growth process of “exaltation” to become divine. Human beings today can go through the same process in this life and the next, according to Mormonism. “Embodiment is required for exaltation,” she said, emphasizing the “earthiness” of her tradition. I came away from her talk with a yet-greater appreciation for the bubbling-up of creative interpretation of LDS doctrine by faithful Mormons. The church has no professional theologians, making room for Provo housewives to come up with hermeneutics that support progressive social change and environmental activism. The forum for this ferment is the Mormon Bloggernacle – a loosely-knit world of blogs by faithful and lapsed LDS members. (For a great introduction to this phenomenon, have a look at the blog of Joanna Brooks.)

“Emergent church” writers and speakers Brian McLaren and Tripp Fuller hosted a track called “A New Way for a New Day,” focusing on “recovering evangelicals” who are alienated from traditional churches. McLaren talked about the yearnings of exiles from what he sagely calls “Roman Protestantism.” Lisa Gasson, PhD candidate in theology at Drew University and a recovering evangelical herself, talked in depth about the preciousness of the direct, palpable, personal experience of faith felt by evangelicals. How can this intimacy with God lead away from reactionary politics and toward a gentler, more eco-friendly and inclusive kind of Christianity? Lisa is a student of the intriguing eco-theologian and conference plenary presenter, Catherine Keller, author of Cloud of the Impossible. Lisa referenced Lurhmann’s 2012 anthropological and psychological study of evangelical spirituality, When God Talks Back, as she spoke about her own mixed experiences as a participant in the Toronto Blessing, a charismatic fundamentalist movement.

At the track on Christian process theology, Sheri Kling, a PhD candidate at Claremont School of Theology, gave a talk about Alfred North Whitehead and Carl Jung. She parsed out the implicit depth psychology in Whitehead’s process thought, and, focusing on dream analysis, wove it together with Jung’s insight into the collective, trans-personal archetypal dimension of human consciousness.

At one of the plenary sessions, our conference mentor, John Cobb, was in video dialogue with the ecological economist Herman Daly. As they discussed the challenge of shifting the global economy toward sustainability, Cobb said: “It’s easier for theologians to live without God than it is for economists to live without growth!”

I wished I’d had time to visit many more of the conference tracks. But the event was just a prologue to an ongoing conversation here at PandoPopulus.com. Let’s stay connected!

Reverend Jim Burklo is the Associate Dean of Religious Life at the University of Southern California and is author of the webblog, Musings.