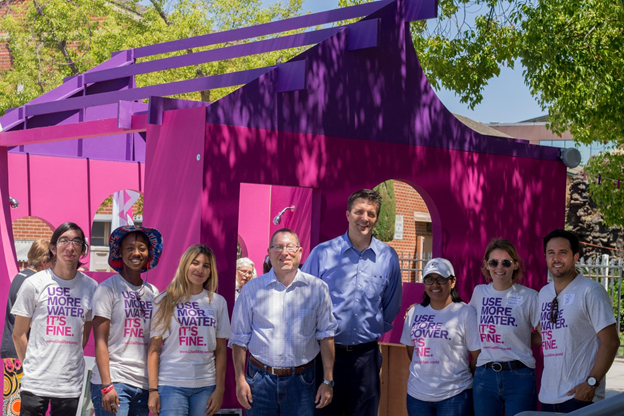 Pando sat down with education strategist Chris Lohse to talk about the programs we’re developing for the K-12 arena, with Magenta House in the lead of our prototype efforts. People know Magenta House as our water conservation and power efficiency program — originally focused on community education and now, with the upcoming Expo and Accelerator, targeting Middle and High School learning. But as Chris explains, there’s a lot more to it than water and power. Magenta House is fundamentally a program in civic engagement at a time when the institutions of civil society — and even civil discourse itself — are under threat.

PANDO: Chris, why do you call out the “civic engagement” angle on Magenta House?  The most obvious way of framing our Magenta House education program is simply through the lens of sustainability — water and power.

CHRIS LOHSE: Of course it’s all about water and power content. But look deeper and you come to the intersection of youth and civic engagement, which Magenta House responds to.

That’s why I talk about the content of Magenta House being water- and power-related but the fundamental educational dynamic being deeper. The phrase in education circles is “self-efficacy.”

Teaching civic engagement implies that students will learn to not simply accept their surroundings, but to feel a sense of agency to actively change them.

Engagement is tied to hope. It’s hard to have hope without getting engaged in some fashion. Civic engagement and hope are two sides to the same coin.

The political situation is such that we have to create engagement strategies in a massively divided world.

There is an increasing gulf, a real divide, between people who are deeply educated in the world and those that are not. That is driving a huge amount of tension worldwide.

This can lead many on both ends of the spectrum to believe the other side needs “fixing” — if not the other side being outright delusional, or worse.

We need a common meeting ground where everyone can contribute. It could be a discussion forum of some kind, but even the best of these are passive, abstract, and tend to get tribal pretty fast.

Can we find another approach? Can we create a working environment to which everyone can contribute and in which it’s reasonable to see the other as valuable regardless of their labels?

You’re talking about the value of projects — working together on initiatives of some sort. Project-centered learning.

“Projects” provide that sort of meeting ground, given especially that they tend to be highly local and focused on challenges that have wide buy-in — at, say, the neighborhood or even city block level.

People will argue endlessly over abstractions and policy ideas — as they are now, across the country. But frame challenges in a practical and local way, and you create the opportunity to get a broad range of people on board.

Talk about water or climate with your neighbor in abstract terms and you might have nothing more than an argument. Collaborate with that neighbor, however, on lowering the water bill or growing fresh tomatoes and you might get somewhere.

So a program like Magenta House, then, gets illuminated in a wholly different light when thought of as civic engagement.

If you were able to create a framework where you could talk about, think about, work on and begin to solve large global challenges as they exhibit themselves at a local level, that would create a framework in which you could start to get better dialogue — based on felt, working relationships on either side of a political divide.

In order to create this framework, in which the tools of civic engagement are learned and prized, young people simply need to be increasingly exposed to it at an earlier age.

I think of it as defining the essence of what education should be about.

From very early on, we define “educated” and “smart” and “useful” in very narrow ways, usually focusing on hyper-specialized skill sets or the ability to think in terms of deep abstraction. We also define these terms in terms of how an individual performs on class assignments.

For students of course, there’s obviously a great deal of value in being able to deal with abstraction, in knowing what needs to be learned and then actually learning it…

True, but there’s a negative side to all this in which opposing camps of “honors” students and “regular” students form and, with that, two groups that are set up for very different futures — who may or may not have much academic contact with each other in their formative years.

No wonder, then, that we have such an intense breakdown in civil discourse in our current political climate, intense polarization, and societal breakdown in terms of being able to get anything done.

Civic engagement projects like Magenta House form a laboratory opportunity, in effect, for students to work together on real and pressing needs at the local and hyperlocal levels.

From this perspective, I could see how civic engagement might even redefine our understanding of education itself. This would be true if “gifted” comes to be famed in terms of being gifted for service.

That’s right. Whereas, if the goal of education is for students to be able to make lots of money, then it’s a different story — as some will make it and some won’t.

If the goal, on the other hand, is the goal of service, or let’s say civic engagement, all can find their calling.

A model like Magenta House is an access point to which many more students can contribute, take something from which is meaningful for their future and build a richer body of skills.

But it’s not a dumbing down of education, either.

I would say that it’s a far more demanding vision than the one we now have.

The problem is that we’ve struggled with education that is often abstracted from the realities of daily life. What we want is education oriented toward the deepest, most commonly-held values for making life better.

You still have to learn your math, history, English…

Of course — and to a high standard! The common good is never served by people commonly not knowing anything.

But the skills that are likely to be developed in a broader context of civic engagement are a lot more in demand than, let’s say, specialized, hyper-focused research skills.

Think about the potential Magenta House project of designing a new type of rain barrel. This requires skills from every end of the spectrum.

The list goes on and on. In the real world, such skills are invaluable but they don’t fit into the traditional silos of learning.

When you give people the opportunity to work with one another, they find that there is real value and legitimacy in what that other person does.

And unlike purely scholastic pursuits, civics also rests on values.

Behind every civic engagement challenge and solution lies a normative statement — unlike solving for the third side of a right triangle.

This is a big part of our challenge now. We are too afraid to have dialogues with one another about values and belief systems.

Think about race and ethnicity. Diversity. It’s a big issue in the country. But it’s a far bigger one when discussed abstractly than it is when you’re aiming to work together on a project and trying to build a team to do the best you can to meet a pressing neighborhood challenge.

Projects focused on civic engagement create space for having these discussions in a real-world setting.

I can see how the context is right for dealing with another kind of problem we’re faced with today, which is a generalized feeling of being overwhelmed…

Feeling overwhelmed, yes, and feeling incapable of doing anything about any of the great challenges we face.

Again, that’s the genius of local projects focused on local issues. These are things we can do something about. It’s the controlling idea ultimately behind Magenta House.

What the Magenta House program does is provide the opportunity for students to take matters into their own hands and create the future they want to inhabit.

Chris Lohse is a former Los Angeles high school science teacher who has since worked to improve learning opportunities for students at all ages and stages worldwide. He currently serves as the Chief Academic Officer and SVP of Government Affairs for Teachers1on1.