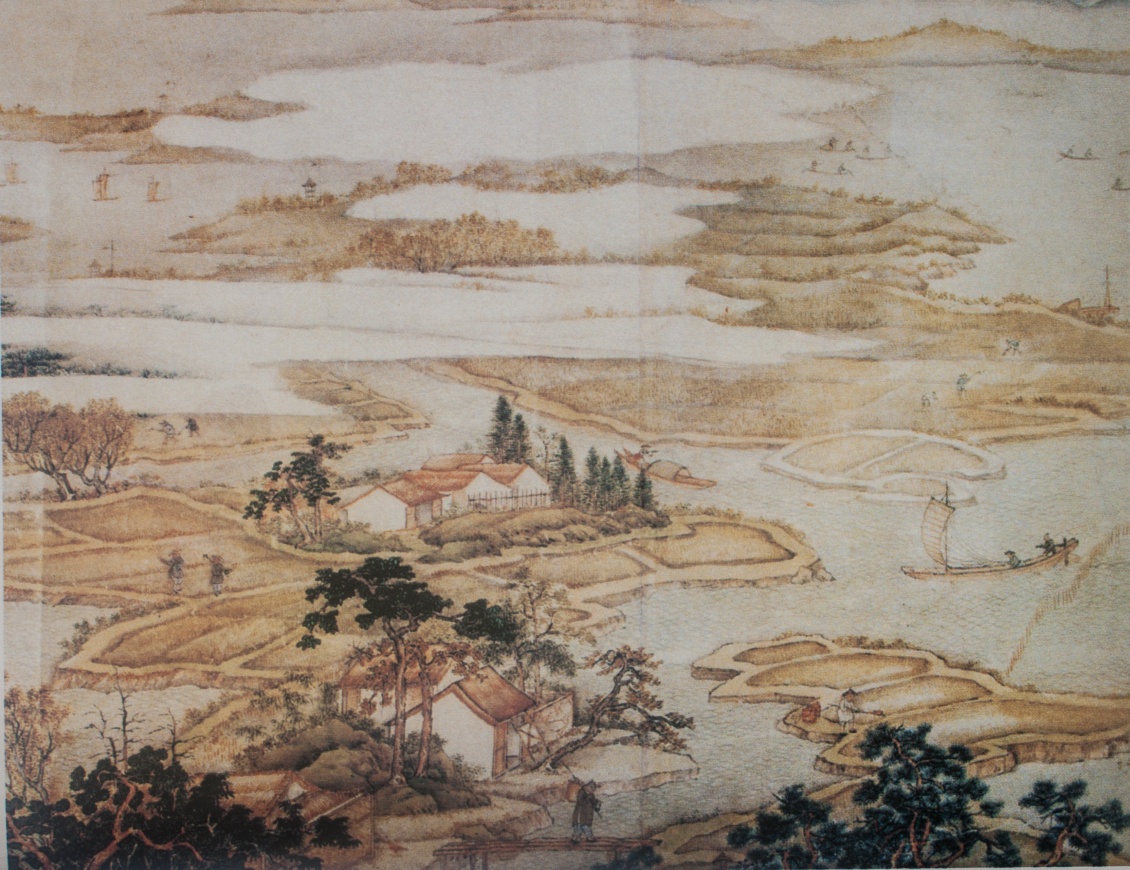 Editor’s note:  The idea of creating a more ecological civilization in China has developed serious traction in the country, report Meijun Fan and Zhihe Wang, Chinese citizens living in Southern California and actively engaged in what they describe as China’s postmodern development. Zhihe Wang is director of The Institute for the Postmodern Development of China (IPDC), founded with John B. Cobb, Jr. Cobb has become a revered figure in China for his work at the intersection of philosophy, religion, and the environment. We asked Fan and Wang to tell us about China, ecological awareness, and growing interest in Alfred North Whitehead, and for Cobb to comment.

FAN and WANG:  China has surpassed the U.S. and is now the number one source of CO2 emissions on the planet. Residents and visitors breathe dark, smoggy air in the cities, and partly because the problems are so serious, China is committed to work for “ecological civilization.”

More than ten years ago, when we first suggested that an ecological or “postmodern turn” was happening, we were often ridiculed in China. Many insisted that the country needed to “catch up with the Joneses” before addressing environmental concerns. The Joneses in this case were the Americans. Ecological issues could be addressed after the country modernized.

But our point was that China needed a model of postmodern, as opposed to modern, development: that is, development that delivered many of the benefits of modernity but avoided many of the perils of industrialization.

As China now faces severe environmental problems, more and more people are realizing the disastrous consequences that await (for China and for the globe) if the country chooses to further copy the development model of unchecked industrialization, even if it is followed by remedial environmental action after a level of development has been reached.

Today, the term “ecological civilization” has become popular after being first officially proposed by the Chinese government at the 17th Congress of the Communist Party of China in 2007, with the goal of forming “an energy and resource efficient, environment friendly structure of industries, pattern of growth, and mode of consumption.”*

The influence of Process thought or constructive postmodernism has kept increasing in China. Two broad intellectual trends are influential in China today:  1) The zeal for “national essence” or “national character,” and 2) Constructive Postmodernism.”  These two trends can, under the guidance of Marxism, not only take root in China, but so develop that, with comparative ease China can complete its “First Enlightenment” of modernization, and also quickly enter into the “Second Enlightenment,” becoming the standard-bearer of a postmodern society.

If this seems unusual, coming as it does in the midst of a period of breakneck development within the country, it does indeed reflect a new way for the Party to discuss development. Rather than emphasizing economic development as the core aim, as it did in the past, Party authorities have opened discussion to the idea that sustainable development must be based on an understanding of an intertwined relationship between humanity and nature. Xi Jinping, China’s president, himself has stressed in a speech to party leaders that “we should no longer evaluate the performance of leaders simply by GDP growth. Instead, we should look at welfare improvement, social development and environmental indicators to evaluate leaders.”**

COBB:  Given China’s size, and the role it plays in the global economy, developments like these are encouraging for everyone.

What is most interesting to me about China today is the language that is being used of “ecological civilization” and the way the language is consciously connected by some to Whitehead’s thought.

Of course, we know that official ideals are not always effective.  The United States is committed to “democracy,” and overthrows governments in order to install it, but the actual effects are more often chaos.  When we see the ecological problems in China we wonder whether the commitment to “ecological civilization” is serious.

Still, slogans make a difference.  For example, in China the government’s commitment to “ecological civilization” strengthens the effort to move toward ecological agriculture. One can begin to make a case for ecological education.  The official commitment of the government shapes the discussion in important ways. The fact that China is using these words, and connecting them to the Whiteheadian intellectual tradition, is something I want to celebrate.

FAN and WANG:  The China Project of the Center for Process Studies, partners inside and outside of China, and The Institute for Postmodern Development of China (IPDC) have organized more than 90 international conferences in China and the U.S.  Over the past decade, some thirty Whitehead-related centers have opened across China as affiliates of various Chinese universities.  John Cobb is treated in the highest circles as a celebrity.

Many conference papers and reports on ecological civilization have been published in prominent Chinese media.  More than 30 process-related books have been translated and published. The emergence in Chinese of Organic Marxism, by Philip Clayton and Justin Heinzekehr, has been met with best-seller acclaim.

Professor Yijie Tang of Peking University, a leading scholar in traditional Chinese philosophy and culture, sums the value succinctly: “Process philosophy… has important implications for the solution of the ecological crisis facing us today.”***

COBB:  Why is process thought taking such hold in China?  I’m not sure I fully understand.  Of course, part certainly has to do with genuine concern for the environment and the health of the planet.  But what more is happening here?

Part must have to do with an effort in China to reconnect with big ideas of its past.  Ironically, the path to do this may be through the thought of the Western philosopher Alfred North Whitehead.

For much of the 20th century, modern ideas eviscerated traditional thought in China—and often in a more thoroughgoing way than in much of the rest of the world.  Marxism, of course, was Western, and under Mao’s interpretation of it Chinese tradition suffered enormously.  Reviving that tradition now is not as simple as deciding to honor Confucius—even though that positive development is happening.

Communism is itself very ideological.  The collapse of communism internationally and the growth of capitalist solutions in China has undoubtedly left many with feelings of being ideologically and intellectually adrift.

Now, the limits of the modern project are on vivid display all over the world— whether as Marxist, capitalist, or hybrid approaches.  Environmental crises display the whole of the modern economic enterprise as bankrupt.

Into this intellectual environment steps Whitehead’s process thought, with its strong resonance to Eastern ways of thinking, its rootedness in the Western history of ideas, and its philosophical vision of profound ecological interconnectedness.

Process thought is not at odds with a Marxist view of history—so far as it goes.  Its critique of Marxism is much the same as its critique of any modern economic system that is mechanistic in its orientation. It must be challenged with an Earth-centered approach.

Marxist thought is the bible in China.  You don’t do away with the bible; you must relate to it.  Marx is required study throughout the country, but like any required study, it can lose its impact.  The idea of “ecological Marxism” brings meaning and zest to an otherwise moribund topic. Whitehead offers new ways of relating modernity, tradition, and the environment.  This is welcomed on its own merits, as well as at schools of Marxism which must offer required courses for bored students.

FAN and WANG:  Since in agriculture lie the roots of ecological civilization, one of our important goals in China has been in promoting ecological agricultural development, including organic farming.

Although agricultural production in China today does grow vast amounts of food, it comes at the high cost of serious pollution in the countryside and almost irreversible destruction of rural lands.  China faces the constant threat of losing its great resource of people who live close to the Earth and to one another. Fortunately, the country is becoming more and more aware of this threat and is attempting to reverse the trends that result from past mistakes. Constructive postmodern thinkers play an important role in this process by promoting postmodern agriculture which could provide healthy food for current and future generations by preserving the fertility of the soil and the well-being of nature to ensure economic sustainability. It also could provide economic support and cultural meaning for farmers and their local communities.

Working together with the Chinese Academy of Governance, we have so far organized three forums on rural civilization. These have brought together more than a thousand ethnically and culturally diverse participants from the far corners of China including farmers, advocates for rural life, and the academy. Now “postmodern agriculture” has become a hot topic.

COBB:  This is probably the most exciting development in China today because food, and the way we grow it, is so fundamental to creating a more ecological way of living.  Furthermore, in China, the issue is being addressed at a critical time when something can still be done – that is, before the destruction of rural life is complete.  This does not mean that urbanization should be stopped altogether.  Many “villages” are far too populous to be supported by their farmland.  Recently, the government announced its intention to remove 250 million people from the countryside to the cities. But much of the rural population could have a good life in their villages if these are healthily developed.  I went there recently to add my voice in favor of farmers and healthy rural development.  I am told that my voice has had some effect.

FAN and WANG:  Dr. Cobb’s lecture, titled “China’s Unique Chance,” was very well received. In her comments about Dr. Cobb’s insights about agriculture, Gu Xiulin, a professor of Yunan Finance University, a well-known Chinese scholar, said, Agriculture is the foundation of a nation, and it requires forethought. We Chinese have failed to raise real questions, have serious discussions, and suggest true solutions regarding the direction in which China’s agriculture should walk. But an American did it. What we can do is to appreciate him.****

China’s Environment Protection Minster, Jining Chen, recently delivered a lecture to an audience of eight hundred, consisting of higher government officials, military generals, leaders of state run businesses, representatives of universities, and presidents, professors and college students in Beijing, in which he mentioned the names of Cobb and Clayton, and quoted their writings about ecological civilization (http://www.bjee.org.cn/cn/news_detail-50410.html).

For its part, IPDC has established two centers in the countryside, one in Hengshui, Hebei, and one in Anji, Zhejiang, both of which focus on ecological agriculture and organic farming. The International Eco-villages Network, with which IPDC cooperated in a recent conference, is also planning to build one hundred eco-villages in the future.

COBB:  When I look to the future, I’m more encouraged about the prospects of creating a more ecological civilization in China than anywhere else.  The reason is that Chinese culture as a whole contains an ecological dimension which only exists in the West in a few isolated places. We are moving into a period where traditional thought and practice will be vital in keeping us connected to the Earth.  The fact that China has not yet “developed” enough to fully destroy those connections, and has these traditional roots in its past, makes me more hopeful for China than for countries further along the path of industrializing agriculture

FAN and WANG:    In ancient Chinese, the opposite of the word poor is not rich, but change. Yi Jing (The Book of Changes) says, “Poor leads to changes, changes in turn lead to finding a way out, and in turn enable sustainability.” This ancient wisdom may well guide the Chinese people toward ecological civilization.